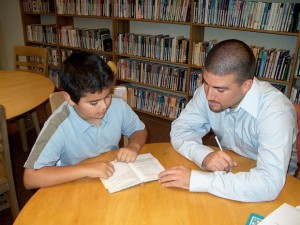 A tutor assists a student.

Two years ago, federal education officials gave Indiana a break from some of the most burdensome requirements of the No Child Left Behind law.

But Education Week‘s Michelle Molnar reports “the private tutoring industry… has been hit hard” as nearly 40 states plus D.C. have received ‘No Child’ waivers from the feds:

Those waivers… allow school systems to avoid the NCLB mandate that they use 20 percent of Title I funds for after-school tutoring and transportation for school choice to eligible students.

Many for-profit providers of the tutoring, known in the NCLB law as supplemental education services, have had to pursue new K-12 revenue streams, or even close their doors, as federal funding funneled through affected school districts is being reallocated for other purposes.

At its peak several years ago, tutoring services were provided by about 2,500 companies and other organizations that had received state approval to work with students, using money allocated to improve students’ academic performance, according to Steve Pines, the president of the Education Industry Association, based in Vienna, Va.

Today, he estimates, the number of providers has dropped by 50 percent.

Evidently, Indiana is one of the states that no longer requires districts to provide these “supplemental education services.” When you Google “Indiana Department of Education” and “SES,” here’s the page you come to:

"Supplemental Educational Services (SES) is no longer required in Indiana," reads an IDOE webpage, citing the state's waiver from No Child Left Behind.

In a February 2012 memo, the state’s then-school turnaround director Jim Larson says schools that chose not to offer supplemental education services — such as tutoring — beyond the 2011-12 school year had to inform parents of the change. It was still possible, he noted, for certain schools to continue to use federal funds to pay for the services if they chose to.

It seems a little late for us to notice, but we’re curious what this looks like in schools. Did tutoring services go away in your building? Let us know in the comments.