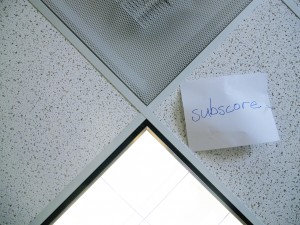 After we posted our data analysis, a few readers noticed the 165 schools who saw higher grades because of former state superintendent Tony Bennett’s last-minute tweak to Indiana’s A-F grading system all received A’s and B’s.

“No schools were bumped up to D’s or C’s. How is that possible?” one StateImpact commenter wrote. “Is it just that lower performing schools never earn ‘extra points’ for improvement?”

The answer has to do with the “subscore ceiling”, the scoring guideline it appears Bennett’s staff disregarded in the process of bumping up the grade of a favorite charter school from a C to an A.

Simply speaking, the subscore ceiling does not hinder the grades of schools that received D’s and F’s. Even if state officials left it in place, it would not have hurt these schools’ grades in any way.

Wait — “subscore ceiling”? We explain the scoring practice in this video — it’s apparently the thing state officials changed to lift not only Christel House’s A-F grade, but the grades of 164 other schools too.

As we’ve explained, state officials designed the subscore ceiling to ensure schools that received A’s were getting high marks in both math and English.

Quick reminder: Schools are graded on a four-point scale for both their math and English ISTEP+ scores. But with the bonus points the state awards for the number of students who meet growth targets, schools can receive a total of six points in either category.

Because the school’s final A-F rating comes from the average of these two subscores, it was theoretically possible for schools to cancel out not-so-good scores in either Math or English with better scores in the other subject.

And therein lies the explanation to why removing the subscore ceiling did not aid any schools that received F’s or D’s: If one of a school’s subscores is good enough to hit the subscore ceiling — even if the other subscore is low, it’s not mathematically possible for that school to receive a D or an F in the first place.

To illustrate this point, we broke out the white board yet again. These are two examples of schools that were helped by lifting the ceiling: 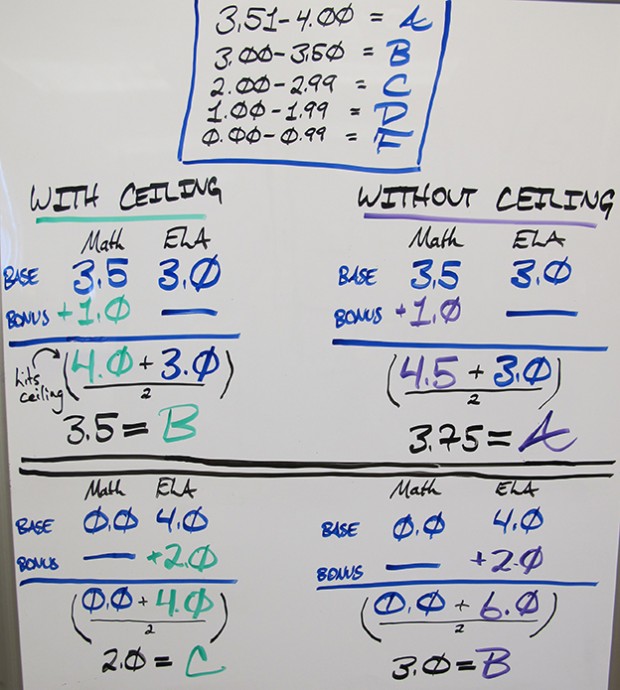 The example on the bottom another school that could be helped by lifting the subscore ceiling — but it’s an extreme example that it actually didn’t exist in this year’s grades.

With the subscore ceiling removed, this extreme case school can earn a B. But even with the ceiling in place, the worst grade this school can receive is a C.

Here’s another way to visualize it — these charts illustrate how to calculate school’s final grades with and without the subscore ceiling:

A table that illustrates the impact of the subscore ceiling. Remember a school's final grade comes from the average of two subscores — Math and English. The subscore ceiling prevents schools from counting more than four points in either subscore, even after including bonus points. The darker shaded areas of the right table show what becomes possible for schools earning more than 4 points in one category after the ceiling is lifted. (Click on the image to enlarge.)

You’ll notice that it’s a simple matter of averages. And it shows that it’s mathematically impossible to construct an example of a D or F school that would be aided by removing the subscore ceiling.