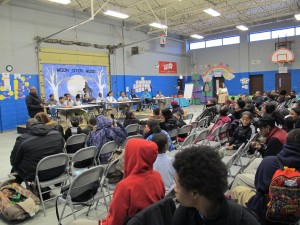 Parents pack into a large common room in the back of Charter School of the Dunes in February. At the time, the school was in danger of being shut down. The school has since moved into a new building — with a new authorizer.

When we profiled Gary’s Charter School of the Dunes last winter, they were in danger of being shut down right as their newly-constructed campus was set to open.

A lot has changed since then. Carmen McCollum reports for The Times of Northwest Indiana:

Sen. Earline Rogers, D-Gary, a retired teacher and a strong proponent of traditional public schools, said she sees nothing wrong with a charter school that has lost its authorizer shopping around for a new one.

That’s what Gary’s Charter School of the Dunes did last spring. The school was one of seven schools across the state notified in January it would not be renewed by Ball State University’s Office of Charter Schools. At that time, Danielle Sleight, charter school board president and chief executive officer, said she would appeal the ruling and search for a new authorizer. Calumet College of St. Joseph agreed to be the school’s new charter sponsor effective July 1…

However, Rogers also said there should be a moratorium expanding new charter schools in Gary.

“I think Ball State was under a lot of pressure to not authorize some of their failing schools,” she said. “Charter School of the Dunes has a mission dealing with the environment and they had already started on their new building. I believe that and the fact that Calumet College is a local university and is in close proximity to the school will work well for them.”

Calumet College leaders told McCollum they stepped in because Ball State’s charter office was going through “growing pains.” But they also say this year will not be business as usual — they’re working to raise the bar for Dunes’ staff and students.

“Our expectations are high, and I think they see that now,” Calumet’s Jessica Madden told The Times.

Greg Richmond of the National Association of Charter School Authorizers is leery of that claim, and claims like it.

As they pitch other authorizers, these failing schools will come up with many explanations for their low performance. They serve a lot of low-income students. Their students come to them far behind academically. They’re popular with parents. Other public schools are no better. They need more time.

Indiana’s parents and taxpayers should be wary of these arguments. These groups were given a charter because they said they could do better. They knew that many of their students would be low income and come to them behind. But they said they could succeed; none of them proposed to run a “D” or “F” school.

The leaders of the schools say the reality on the ground is different.

“There is a need for a safety net. Someone has to fulfill that,” Rev. Mike Nickelson, the board president of Fort Wayne’s Timothy L. Johnson Academy, told StateImpact in January. Dropped by Ball State this winer, Nickelson’s school has since enlisted Trine University as its authorizer.

“Yes, we’d all like for our schools to do extremely well and for the bottom to be as good as the top. But there is a bottom. Someone has to care for it. We’re that people. We care,” Nickelson says.