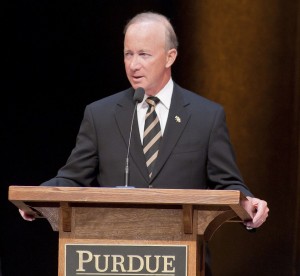 Purdue President Mitch Daniels is firing back after the Associated Press printed emails the former governor exchanged with education officials and staff about a textbook written by a liberal historian.

In a 2010 email exchange, Daniels asked if Howard Zinn’s “A People’s History of the United States” was being taught in Indiana. Speaking Wednesday, Daniels called the article “utter distortion” but says he stands by his decision the book shouldn’t be used.

“Look who I was communicating with,” says Daniels. “I didn’t talk to anybody at the Commission for Higher Education or anywhere else. I simply was inquiring about the K-12 system and asking whether this false, misleading version of American history had found its way into Indiana classrooms.”

But Daniels says he supports academic freedom and thinks university professors should be free to include whatever they want in their courses.

He says he’s had a few conversations with Purdue faculty since the AP story came out, and says those who have heard both sides understand his perspective.

Daniels also says he thinks the AP article was unfair because it brought in a separate, 2009 email exchange about an Indianapolis University-Purdue University Indianapolis professor who had been a vocal opponent of the governor’s education agenda.