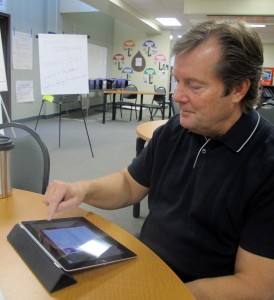 East Allen County Schools technology director Bill Diehl demonstrates how to use iTunes U on his iPad. Teachers in the district are building their own courses using Apple's electronic textbook distribution platform.

Last summer, East Allen County Schools made a push to put an iPad in the hands of every student, doubling the number of digital devices in the district.

The district didn’t add any technology staff, just miles of cable and a wireless access point in every classroom.

Right before school started, the technology department passed out 7,000 iPads to every sixth through twelfth grader in the district.

“We had dire predictions at the end of the school year that people were going to walk off with them, that we were gonna have a mess,” says technology director William Diehl. “But I have to say, to the goodness of the hearts of our parents and students, we got them back.”

Schools across the country are launching one-to-one programs that put an iPad, laptop or other device in the hands of every student. But when it comes to technology, accidents happen: Screens crack, keyboards break, components fail.

So what happens when a damaged device belongs to a school corporation?

What Happens To All Those iPads Over The Summer

Diehl fought for a take-home one-to-one program when the school board voted to buy iPads last spring.

“They thought we had a screw loose on those iPads going home,” he says. “‘Oh my gosh, we’re going to lose hundreds of them!’” 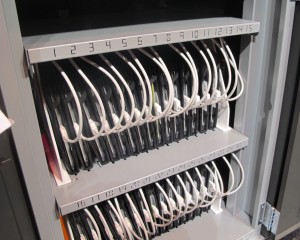 East Allen County Schools owns 16 technology carts that can charge and reimage 30 iPads at a time.

The district did: 236, in fact. But as Diehl is quick to point out, that’s less than 5 percent of the iPads that went out at the middle and high schools.

“We said, if you want to have a great year next year, we gotta have them back,” says Diehl.

But the work isn’t over when the iPads are collected. Over the summer Diehl and his team oversee maintenance on all the devices.

The iPads — $3.6 million worth — are stored in a secure facility with cameras and lights that’s locked down all summer.

There, in batches of 30 at a time, Diehl and his team say they “bake” the iPads — a term they use for loading the devices onto a technology cart and re-imaging them for next school year.

The standard configuration for each school is a little different. “For Woodland,” Diehl points out, “we want Woodland Warriors. So you pull it out, and the screen has a warrior on it.”

Diehl pulls an iPad off the cart and runs through a checklist attached to the cover. Every device got a once-over when it was turned in for the summer. But the iPads are inspected again before they go back out to students. 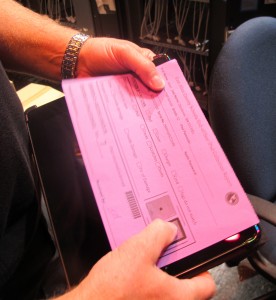 Each iPad has a checklist to make sure students returned the device in good condition. Students will get the same iPad back next year.

If there is any damage — like a broken screen — it’s a $100 fix. Diehl says his office handles about 15 to 20 iPad repairs a week during the school year. A Fort Wayne company fixes the damaged devices for $100, and the school district passes along the cost to parents. Optional insurance lowers the cost of a replacement device if the iPad is lost or stolen.

It’s important that every single crack or dent gets fixed, says Diehl.

“It’s like getting a dented car,” he says. “You don’t care about the third, fourth, fifth, sixth dent.”

So who’s hardest on their iPads? Probably seniors, who know they’d be handing off their devices to underclassmen the next year. But even teachers have accidents sometimes: One educator ended up backing over his iPad after setting it on the roof of his car.

The district gave him another.

“But if they lose it a second time, they pay for it,” says Diehl.

What The Research Says About Large-Scale Tech Initiatives

East Allen County systems engineer Ben Byers says the trick to launching a successful one-to-one program is making sure the infrastructure is in place before a single new device enters the building.

In East Allen County, that meant buying more bandwidth, adding more access points and installing an Apple TV and SMART Board in every classroom.

“It’s great for kids to be able to take home devices — but it’s not necessary.”
—Krista Glazewski, IU professor

So is it worth it?

“It’s great for them to have access to devices, to be able to do things in classrooms that they wouldn’t be able to before the devices were in place,” says Krista Glazewski, an associate professor of instructional systems technology at Indiana University.

But she says kids don’t necessarily need to take devices home to reap the benefits of a one-to-one program. She says there’s no “one size fits all” approach to technology:

The schools that are experiencing the most success are also investing in programs for teachers to help prepare them for a new technology in their classroom. They’re also investing in policy around how the devices will be used, looking at other schools, looking at other programs, who’s done this and who’s doing it really well? Also they’re taking in account the students and the nature of the students. Some schools have policies where students will take the devices home. Some schools have policies where it’s bring your own devices. Some schools have policies where all of the devices stay in the classroom. All of those decisions feed into what kind of program do we want, what’s the school and the environment that we really value, and what is the best way we can approach this or phase this in gradually rather than just bringing a bunch of devices into classrooms and saying, ‘Go for it.’

Those decisions, Glazewski says, may be better made at the school or building level than across a school district.

The Future Of Textbooks In A One-To-One District

For his part, Diehl visited schools across the country to see how teachers were using devices in the classroom before launching East Allen County’s one-to-one initiative. 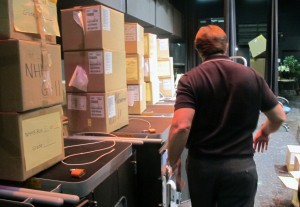 Bill Diehl walks among stacks of iPads in summer storage. The district is reimaging every device before checking them back out to students in the fall.

“I stood in the back of a classroom in Kline, Texas, and watched every kid on every device have the same video up,” says Diehl.

Newman starts with a packet of materials that aligns with state standards. Then she pulls in other online resources, like videos, podcasts, websites and maps.

“We bring things in and add to it on a regular basis,” says Newman, adding that the suggestions come from teachers. “So it’s a living document.”

Newman primarily works with two teachers at each grade level, but every educator can submit additional material he or she has found helpful. As teachers get more comfortable with the technology, Newman says she gets more recommendations on what to add.

Right now, East Allen County students are required to purchase electronic math textbooks for their iPads. But in two to three years, as teachers become more comfortable writing their own courses, Diehl predicts the district will do away with those as well.

That’s why he says it’s so important kids be able to take their iPads home.

“If your eventual goal is to flip classrooms and have tremendous, game-changing digital resources, when kids are taking them home, they have that window on the world 24/7.”