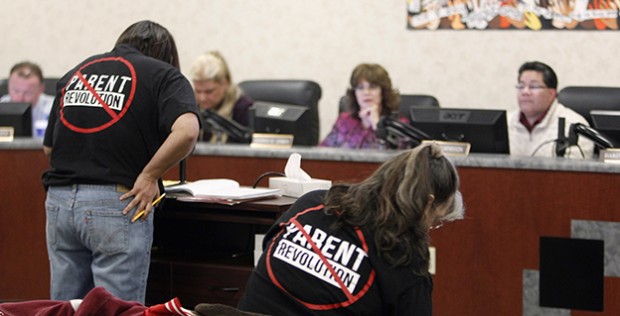 A parent speaks to the school board in Adelanto, Calif., regarding the state's parent trigger law.

In the Hollywood version of parent trigger laws, motivated parents of children trapped in a failing inner city school join forces to take over the institution and save their children’s futures.

In reality, trigger laws, which allow parents to intervene in a struggling school, are a lot more complicated and controversial.

Versions of parent trigger laws have been proposed in at least 25 states and adopted by seven, according to the National Conference of State Legislatures. In real life, parent triggers have been attempted only a handful of times.

Nominally, Indiana counts among those 25 states with “parent trigger” laws — but also counts among the states where no parents have pulled the trigger.

Indiana’s law, which has been on the books for two years, says any school that receives a D or F rating from the state for at least two years becomes eligible for the “trigger” takeover process. If 51 percent of parents sign a petition, the district’s school board must vote on whether to convert the building into a charter. But a school board isn’t likely to voluntarily relinquish control of a school.

But while, as Lu writes, “opponents say parent trigger laws are a veiled attempt to privatize schools,” some advocacy groups that are active in Indiana — from Students First to the Fort Wayne Urban League — support enacting more comprehensive trigger provisions.