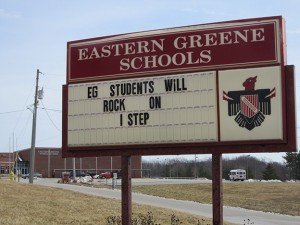 The sign outside a Greene County school encourages students as ISTEP+ testing began in March.

The head of the company that administers Indiana’s benchmark standardized tests will face questions from state lawmakers Friday about why so many students faced problems while taking their online ISTEP+ exams two months ago.

CTB/McGraw-Hill president Ellen Haley, whose company is in the midst of a four-year, $95 million contract with the state, is scheduled to testify before the combined membership House and Senate Education Committee at 1 p.m.

Problems with the company’s servers kicked at least 78,000 Indiana students out of their tests on April 29 and April 30, prompting widespread suspension of testing both days.

Local school officials have flagged another 67,000 tests as disrupted, meaning someone has identified roughly 30 percent of all completed tests as having been impacted by the disruptions.

CTB has since apologized.

“The interruptions are not acceptable to the students and educators of Indiana or to CTB/McGraw-Hill,” a company statement from April 30 reads.

With serious questions lingering about whether this year’s ISTEP scores should count toward state-mandated ratings for schools and teachers, state superintendent Glenda Ritz has hired an outside expert to review the results.