Every morning at Rocketship Mosaic Elementary in San Jose, California, starts the same way — students and staff gather on the playground outside the building for a ritual known as “launch.”

Principal Adam Nadeau greets the students and leads them in the school motto. Students put their hands over their heads like they’re ready to blast off as they recite the creed.

“I am a Rocketship Rocketeer at home, at school, and in my community,” the students chime. “I am respectful of myself, others, and the environment. I am responsible for my learning, actions, and achievement. I am empathetic to my world. I am persistent in attaining excellence. Together we are all Rocketship Rocketeers!”

Nearly all of the school’s 630 students are Hispanic. Most are English language learners. Still, all seven of Rocketship’s San Jose schools are meeting state benchmarks in California’s accountability system.

Now the K-5 charter company wants to open more schools in a half dozen other cities, including Indianapolis.

How Rocketship Staffs An Entire School With Just 16 Teachers

The idea behind launch is simple: It’s a way to get kids pumped up before the day starts. Inside the school students rotate between traditional classrooms and the online learning lab. The schedule means the school only needs three teachers for every four classes. 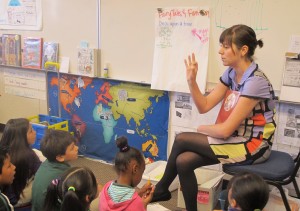 Because Rocketship students — called 'Rocketeers' — spend part of their day learning at a computer, teachers are in charge of instruction for more than one class of students.

Co-founder and CEO Preston Smith says Rocketship teachers put in longer hours in the low-income, urban areas the school targets, but they get paid as much as 50 percent more as educators in nearby districts.

“I don’t think this is an 8-3 job,” says Smith. “We should be really honest, and we should therefore compensate our teachers and make sure that it’s similar to being a partner in a law firm or similar to being a nurse or a doctor.”

Rocketship pays classroom teachers more, but it keeps costs down by relying heavily on lower-paid hourly employees to staff the learning labs where students spend part of the day. The company is committed to operating schools only on money from the state — so costs don’t exceed the per-pupil funding amount.

But that doesn’t make Rocketship’s business model inflexible to the needs of students, says Adam Emerson, a school choice advocate at the Thomas B. Fordham Institute, an education policy think tank that supports vouchers and charter schools.

“For a good portion of the day, their kids are on computers, and there is personalized learning going on,”says Emerson. “Even that business model has changed over time for Rocketship. It has tweaked its approach on that. It’s continually looking at it and continually changing things to better suit its needs and the needs of its kids.”

Why Rocketship’s Blended Learning Approach Has Its Skeptics

Rocketship is one of an increasing number of charter schools blurring the line between computer and classroom with business models that rely on online instruction to cut costs, says Emerson.

“I don’t think families are out there looking particularly for a blended learning model, but they may look at a particular school and like what they see,” says Emerson.

That’s what happened when Rocketship entered San Jose. The company hasn’t been able to open schools fast enough to satisfy demand. More than 400 students are on the waiting list at Mosaic Elementary, and Rocketship has permission to open 20 more schools in the Bay Area.

“Individualized learning sounds like this thing that makes you feel as if my student, my child will be getting this really personal, customized experience,” says Glazewski. “But it ignores a whole body of research that says that kids should not be spending large blocks of time in front of computers.”

Glazewski says in a traditional classroom, a skilled teacher can redirect a student who’s off task within a few seconds. But a computer lab instructor can’t do much more than tell a student to put his headphones back on and get back to work.

“It’s a computer program that’s reacting to the input of the student in very predictable ways,” says Glazewski. “So if a student behaves kind of unpredictably, the computer program doesn’t know how to respond to that.”

Can Rocketship Compete With Other Indianapolis Schools?

But Rocketship’s CEO says he’s confident his company has hit on a model that — with a few tweaks — will work for low-income kids across the country, not just San Jose.

In Indianapolis, Rocketship will have to compete not just with public schools but also an established charter school network and voucher-accepting private schools.

“What I would say is I don’t there’s an option similar to Rocketship right now in Indianapolis in terms of the parent engagement, in terms of the focus on personalized learning,” Smith told StateImpact. “We offer something very different, very new, and I think we just have to do outreach and talk to families and hopefully they’ll make an informed decision.”

Even though the Indiana Charter School Board has already awarded the company permits to open multiple schools starting in 2015, Smith says the plan is to start one and determine whether it’s a success before opening a second. Typically Rocketship sends a team to a new city 18 months in advance of opening a school, a process that has already started in Indianapolis.