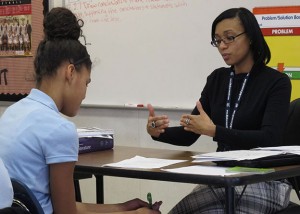 A student at Gary's Charter School of the Dunes works with her teacher.

Of the seven charter schools from which Ball State University pulled its sponsorship over the winter, four of them will still open for business next year — two as private schools, two with new charter authorizers.

That phenomenon, known as sponsor shopping, has raised concerns that low performing charter schools can run from accountability any time they are in danger of having to answer for their poor scores just by finding a new sponsor.

There is an argument that there’s nothing wrong with what’s happening here. If someone sees potential in a school that has underperformed and is willing to make a leap of faith by taking the role of overseer either in the public or private school sector, perhaps they should be given that opportunity.

But I’m not sure that’s what legislators intended when they created the charter school law…  Sponsors, some believe, should… have ultimate authority to decide whether charters have lived up to their promises. After all, nobody knows those schools better than their sponsors.

When their schools’ futures were in jeopardy, teachers at two of the jeopardized charter schools told StateImpact Ball State’s decision caught them by surprise and disputed the notion their schools were “failing.” Some parents told us their children felt at home in a school for the first time.

“I’m not just thinking about [my daughter’s] scores in school, but I’m thinking about her safety,” Charter School of the Dunes parent Daniel Kinney told us in February, adding, “The smart kids, the kids that want to learn, they’re here [at the charter school] and they don’t have that fear factor.”

In partnering with a new authorizer, Charter School of the Dunes leaders tell The Times of Northwest Indiana they’re ready for a fresh start.