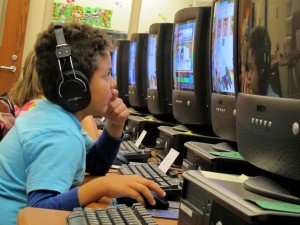 A student at Crawfordsville's Hose Elementary uses a computer in the school's media center.

President Obama will announce Thursday a program designed to expand high-speed internet connections in rural areas “for 99 percent of students across the country,” reports The Washington Post:

Under the initiative, which Obama will lay out in an afternoon speech at a high-tech middle school in North Carolina, nearly all of the nation’s students will have access to high-speed broadband and wireless Internet at their schools within five years…

Fewer than 20 percent of the nation’s educators believe that the Internet connections at their schools meet their teaching needs, according to White House aides. The aides said Obama will call on the Federal Communications Commission to use its existing E-Rate program to meet that goal and will tell other parts of the federal government to redirect resources toward classroom technology and teacher training.

As we’ve written before, some policy experts fear the growth of a “digital divide” between students who have computers or faster internet access at home and those who don’t — a divide that, the worry goes, could impact outcomes in school.

In an effort to bridge this gap, some Indiana school districts have introduced “one-to-one” technology initiatives, giving students access to iPads or laptops they can use both in class and at home. Slate‘s Future Tense blog reports students without home access to computers can be at a disadvantage:

Some end up huddling in McDonald’s and Starbucks just to complete homework assignments. In 2011, the public schools in Fairfax County, Va., an affluent district outside Washington, D.C., introduced an e-textbook program to replace printed textbooks. But the books worked only when students were online, and some features required high-speed Internet access. Ultimately, the district had to purchase an additional $2 million worth of textbooks to support students who did not have adequate access to use the electronic versions at home.

But is it worth it to bridge the digital divide? Atlantic Cities posted about a study of California schools that sent computers home with some students:

A jarring new National Bureau of Economic Research working paper concludes that all of this hardware may have no effect, at least in the short term, on educational outcomes… It’s possible that these students may benefit from these computers in some other way that this study didn’t detect. Maybe they’ll be better positioned down the road to apply for jobs requiring IT skills, or they’ll simply have an easier time searching online for the right college.

But broadband access is a somewhat different issue, of course, than computer access. The advent of e-textbooks and the likelihood that assessments will continue to be administered online make fast internet access all the more important for schools.

In Indiana, a Nashville-based company received more than $14.2 million in federal funds from the 2009 American Recovery and Reinvestment Act “to provide… connections directly to 145 public schools and libraries around the state.” 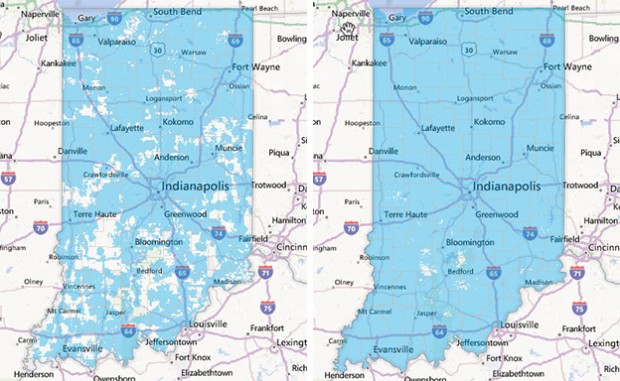