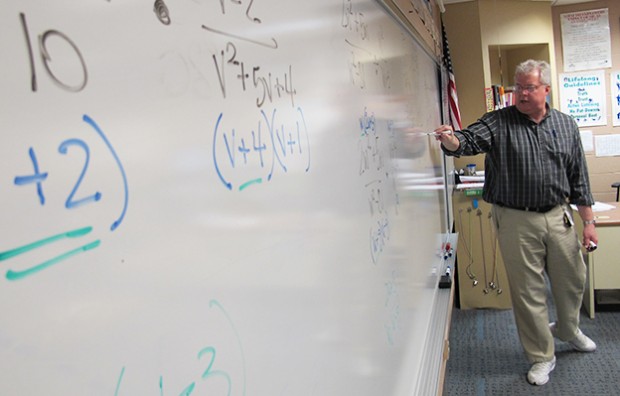 John Rice, a math teacher at Schmucker Middle School in Mishawaka, talks students in his eighth grade Algebra I class through a set of homework problems. Students in this class will take the Algebra I End of Course Assessment this year.

Indiana law requires all students to take two exams to earn a full high school diploma, and Britton Sofhauser has already taken one of them: the Algebra I End-of-Course Assessment.

Most students see the Algebra I “ECA” for the first time in ninth grade. Sofhauser passed it — easily — when he was in seventh grade.

“[My teacher] made it sound like the hardest test ever, but I think that was just so we’d study more,” says Sofhauser, now an eighth grader at Schmucker Middle School in Mishawaka.

But that’s only one extreme. Barely 70 percent of the students who first see the Algebra I ECA as ninth graders pass. By 10th grade, pass rates on the exam drop to 30 or 40 percent.

The discrepancies underline the difficulty educators at the local and state level face in tracking students’ academic growth through high school, especially when the only standardized tests students take cover narrow subject areas.

“You have students that want and choose such very different lives after high school. It’s the job of the high school to prepare the student for whatever path that they choose. That’s difficult whenever you want to hold all students to a very high academic standard.”
—Shelby Richardson, Center for Education Policy
“We do not have a good way of measuring through assessments how students are leaving our high schools,” says state superintendent Glenda Ritz.

Former state superintendent Tony Bennett worked to factor in new numbers — such as graduation rates, AP or IB test results or career training rates — into the state’s “growth model” letter grade rating system for high schools. Before the Bennett administration’s massive re-write of the A-F formula in 2012, a high school’s letter grade was based solely on Algebra I and English 10 ECA pass rates.

“There are multiple paths to success,” Bennett wrote in 2012, “but the formula is the same: an emphasis on the acquisition of the requisite skills that allow our students to compete for high-wage, highly skilled jobs and careers.”

Ritz says the state should rethink the way it assesses high school students.

“I see assessments and academic achievement,” she adds, “as not being the measures — they are part of the picture.”

Schmucker Middle School math teacher John Rice says many of the students in his advanced classes are on track to take higher-level math courses, if they wish. He says the students are placed on accelerated math tracks — in some cases, two years ahead of an average student — because they’re prepared to tackle Algebra I material.

“We feel like we’re putting the kids in the class to pass. If we put more kids in the class, there might be more who don’t pass. Not that if we put in three more in, all three of them would fail, but if we put 20 more in, we might be putting some in over their heads,” Rice explains. “It’s going to reflect on me if it goes badly. If it goes well, it was supposed to go well.”

Though 32 seventh graders in Schmucker’s school district passed the Algebra I ECA in 2012, their scores won’t count for a school letter grade for a few more years.

If those seventh graders remain in the same school district, they’ll end up at Penn High School — incidentally, right across the street from Schmucker — where their passing score will count for the school’s A-F rating once they reach tenth grade.

The view of the ECA can look very different from the high school’s perspective.

Penn High School teacher Brian Griman teaches Algebra I to 30 ninth and tenth graders who struggle the most with math. While many students take in one year, Griman stretches this course over two full years. Why?

“Most of the kids have, typically, a bad attitude towards math,” Griman says. “A lot of them struggle with basics — adding and subtracting of positives and negatives. So we’ve got to start from bare, bare bones and build them up.”

The Challenge Is Between The Extremes

“There’s great disparity in the learners themselves between one district and another,” says Penn High School principal Steve Hope. He tells StateImpact:

If they’re not passing the Algebra I ECA by the time they’re in 10th grade, well, what growth have they made? That’s a better measure for how a school system is doing and how they’re doing with the learners that they have…

If you can pass [the Algebra I ECA and the English 10 ECA], then I guess you’re a productive citizen, you can help out the state of Indiana or the nation just because you passed those two tests — well, it’s kind of crazy when you take that view.

It’s very hard to measure growth with a high school student. There are growth measures — NWEA, ISTEP, reading, writing tests — [in grades] K-6, it gets a little more precarious [in grades] 7-8, and then it’s very difficult in high school. It’s hard to see those changes in reading levels, lexile levels, when you can see that growth and measure that growth pretty accurately K-6 and even into seventh grade.

Shelby Richardson, a research associate at the Center for Education Policy, tells StateImpact it’s difficult because educators want to hold students to the same, high standards while also allowing them to pursue individual interests:

You have students that want and choose such very different lives after high school. It’s the job of the high school to prepare the student for whatever path that they choose. That’s difficult whenever you want to hold all students to a very high academic standard — it sometimes means you’re disallowing them some flexibility to pursue things like workforce training or some hands-on industry-certified program that’s going to prepare them for that they choose after high school. Not that you don’t also want to hold them to high academic expectations — the challenge for high school sis figuring out how to do both, and assessment-wise, how to understand— how to really know where your students are when it comes to all of those different skills you want them to have whenever they graduate.