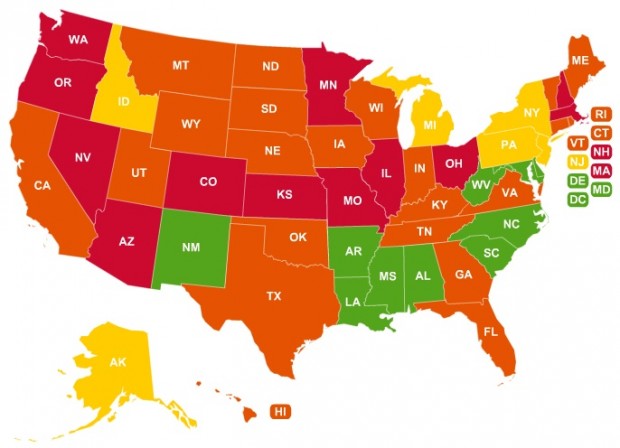 Representatives for state superintendent Glenda Ritz cited her desire to provide more state money for full-day kindergarten programs as a reason for lawmakers to scale back their plans to start a state-funded preschool pilot this year.

The New America Foundation’s Early Ed Watch blog points us to this interactive map of the status of full-day kindergarten nationwide from The Children’s Defense Fund. (What do the colors of the map mean? We have a full key below.) Clare McCann writes:

Since last year’s map, few states have made changes. Indiana, however, reversed its policy of allowing school districts to charge tuition for the “second half” of a kindergarten day; though districts are still only required to offer a half day, if they do offer a full day*, they must do so without charging tuition.

As promised, here’s a full key for the map above from the CDF:

GREEN STATES: Full-day kindergarten is provided at no charge to all children per state statute and funding.

YELLOW STATES: No state statute requires districts to offer any type of kindergarten program although many school districts offer half-day kindergarten at a minimum.

RED STATES: State allows school districts to charge families tuition for the ‘other portion of the kindergarten day’.

The budget proposal currently in the Senate would make an additional $344 million available for operations in all K-12 schools over the next two years, folding a nearly $189.9 million pot of cash for full-day kindergarten into the overall school funding formula.

But that formula pays districts and schools per student enrolled, and the “foundation amount” for kindergarten students remains half the amount the state pays for students in Grades 1-12.

(* When McCann says “if they do offer a full day,” we assume she means “accept state money from the pot of full-day kindergarten grants, they can’t charge tuition.”)