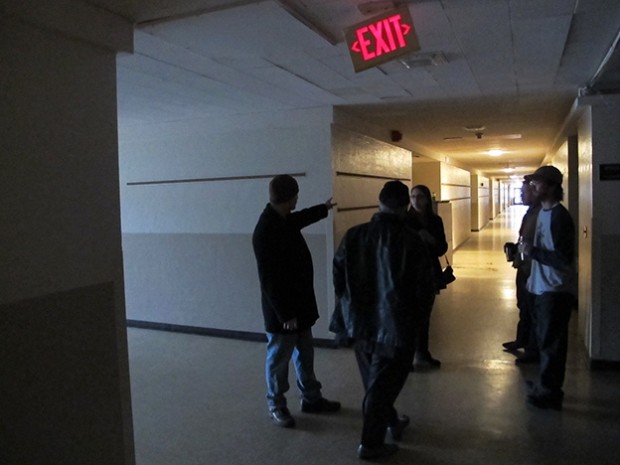 Matthew Brooks points down the hallway of an old school building in Indianapolis in which he and other Project Libertas leaders are considering renting space next year. Project Libertas, a private, non-accredited school formed by charter school the Indianapolis Mayor's Office shut down last summer, is currently renting space in a church-owned gymnasium just northeast of downtown.

The ink was barely dry on a legal decision that sealed fate of The Project School — Mayor Greg Ballard had ordered the Indianapolis charter school to close — when some of the school’s staff declared they would still hold classes this year, charter or not.

And about 20 defiant families have done just that.

The school they’ve opened, called “Project Libertas,” has very little money. But with about 35 students in Grades K-8 and a small staff of former Project School hands, the parents are now seeking a more permanent home.

“I don’t know there’s even a word to describe us,” says parent Matthew Brooks, sitting in a small room in the school’s current location — a church-run gymnasium on Indianapolis’ east side. “We’d need a few hyphenations. We’re an independent, hyphen… communal, hyphen… startup school.”

In a hotbed of school choice — Indianapolis has 11 school districts, more than 40 charter schools and more than 50 private schools accepting vouchers — Project Libertas parents’ choice to start a new school speaks to the depth of their distrust for existing educational options.

“My kids were ignored” in a local public school, says parent Audretta Wright. “Although these teachers here are all white, they care about these kids whether they’re black, Mexican, white — it doesn’t matter.”

There are few guarantees the parents’ choice will pay off. The school will have to earn accreditation against the backdrop of The Project School’s closure due to low test scores and alleged problems with its budget.

“Maybe [Project Libertas] is a case of where a state like Indiana has whet parents’ appetite about  what school choice is like,” figures Jeanne Allen, the president of the D.C.-based Center for Education Reform, “and they want to figure out how to do it, and maybe how to do it better.”

When Indianapolis Mayor Greg Ballard revoked The Project School’s charter, we wrote how the school’s closure highlighted a fine, but definite line between school choice and accountability.

Allen sees that tension in play in Project Libertas as well. She tells StateImpact:

There’s a real, important tension between making sure that the schools we send our kids to do well and respecting a parent’s choice, which may be guided by any number of other factors. The balance for school choice is on choice and accountability. We believe both have to be in place in order for choices to be successful.

That said, these parents were obviously unsatisfied with what was being offered in their local public school… They chose to help create this particular charter [The Project School], which on paper, their measurements showed they were failing to meet even basic measurements of success. What’s happening is that these parents still feel that this school had some capacity to educate their children.

But while Ballard cited The Project School’s academic track record in shuttering the school, Parker Baxter of the National Association of Charter School Authorizers says Project Libertas’ academic performance is less of a public concern when private funds underwrite the school’s operations.

“That’s certainly a concern at a broad level, but not necessarily a public concern in the same way that it is when the school’s actually receiving public money,” Baxter says.

Project Libertas parents refused to turn any students away — which comes at a high cost.

For tuition, the school only asks families to pay what they can. But that only covers half of the school’s expenses. Donations and fundraisers cover only some of the rest.

“Our year is totally not what we thought it was going to be,” says Jeremy Clay, who has five children at Project Libertas.

Clay, a stay-at-home dad who does contracting work on the side, now asks clients to write checks directly to Project Libertas to supplement his tuition payments.

“We’re having to be involved at a level that I haven’t been involved with in a long time, both financially and physically.”

Teacher Owen Harrington says his paychecks from Project Libertas have been spotty. Some pay periods, he estimates he receives 70 percent of the total he’s owed. Other times, he’ll receive closer to one-quarter of his full salary amount. But Harrington is optimistic about the school’s future.

“Things are looking up, seriously, for next year. It’s worth fighting through. It’s not easy fighting through. Honestly, I’m blessed that I have a very understanding landlord,” Harrington says. “I have been late more often than not this year with my rent… My wife has been a rock. I can’t believe she has still put up with this.”

“People coming into our space now would see the things that they saw at The Project School. We know that’s a model that was working and worked for kids. We developed it carefully, we saw it was working, and we see it working here,” Howey Hughes says.

Still, Project Libertas will need to prove itself academically. While the school’s staff uses state standards to guide their lessons and is working to improve areas of weakeness in The Project School’s curriculum, Libertas students won’t take statewide tests this year.

“I don’t know that it’s fair necessarily to say that rather than playing by the rules of the game, they left the accountability field. We’re still grappling with what accountability really is.”
—Jeanne Allen, Center for Education Reform
Next year, the school’s parents hope to gain accreditation as a “freeway school,” a type of private school. That way, parents could receive vouchers to pay their tuition, the school could then make ends meet and students would once again take statewide tests.

While The Project School closed with ISTEP passing rates among the lowest in the city, Matthew Brooks says the school’s charter called for making huge enrollment gains from year to year, which, he says, ultimately hurt the school’s test scores.

‘A Quality School Of Choice’?

With so much of Project Libertas’ staff and student body carrying over from a school with a track record of low test scores, has the school sidestepped the state’s accountability guidelines for charter schools? 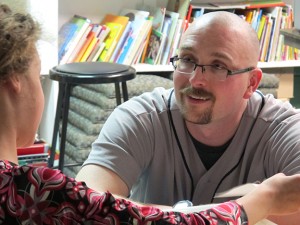 Teacher Owen Harrington says, while his spotty paychecks have made it difficult to meet his own expenses, he believes Project Libertas can succeed. "It's worth fighting through," he says of the financial stress.

“I don’t know that it’s fair necessarily to say that rather than playing by the rules of the game, they left the accountability field. We’re still grappling with what accountability really is. No state has done this right… What we’re assessing isn’t always a measure of whether or not our students are well-educated,” Allen says.

The National Association of Charter School Authorizers’ Parker Baxter takes a slightly different tack. He applauds Indiana’s voucher law for holding low-performing schools accountable for their test scores through funding, but he says schools should be screened before receiving voucher dollars at all.

“The charter school approach really says that choice is a critical component,” Baxter says, “but it’s not in and of itself a value that trumps performance. Ultimately, the school needs to be a quality school of choice.”

On a story we wrote about The Project School’s closure — dated July 24, 2012 — Robert Emerson left this comment:

Isn’t the issue here that they want to take state dollars and do whatever they want? They knew what the rules regarding performance were. If the families are so happy, why not start a private school and pay for it. Those with the purse strings get to make the rules.

You called it, Mr. Emerson.