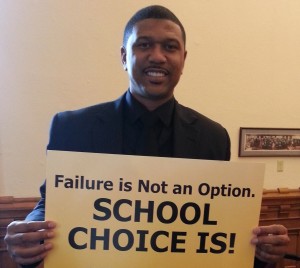 An organization that supports school choice posted this picture of former NBA player Jalen Rose at the "Ed Reform Rocks" rally last week on their Facebook page. A group that opposes charter schools and the state's voucher program is holding a rally of their own next week.

A week after a crowd of 1,000 or more turned out to the Indiana Statehouse at a rally supporting the state’s charter schools and voucher programs, a group that opposes charters and vouchers is scheduled to hold a Statehouse rally of its own.

That’s one of the stories for you ed-heads to put on your radars next week.

The Indiana Coalition for Public Education, a group that endorsed state superintendent Glenda Ritz in the 2012 election, will rally at the capitol on Tuesday, March 19.

“We will not have free T-shirts for all,” writes ICPE president Vic Smith, referencing last week’s rally of school choice supporters, “and homemade signs are the best we can do. We do however… know the history of public schools as the bedrock of our democracy.”