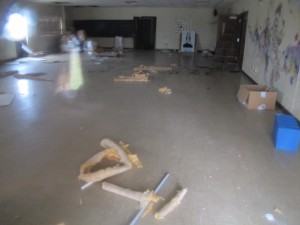 A look through the window of the vacant Pleasant Center Elementary School. East Allen County Schools shut down the school in 2010. The building became the subject of a lawsuit in 2011 because, the Indiana Charter Schools Association argued, its proposed sale to the Fort Wayne Airport Authority violated the state's laws regarding the sale of vacant schools.

Indiana lawmakers are considering changes to a state law that currently requires public school districts to sell vacant buildings to charter operators for $1.

It’s one of the education stories we’re keeping an eye on in the coming week, as a bill amending those guidelines is headed for a vote in the Senate Education Committee on Wednesday.

We flagged this as an education issue to watch in the General Assembly this session back in January.

The new rules would require public schools to hold on to vacant schools for two years instead of the current four years — the amount of time a charter operator has to place a claim on the building. It also would create a waiver process letting public schools sell vacant buildings even sooner.

We have more stories we’re following below: