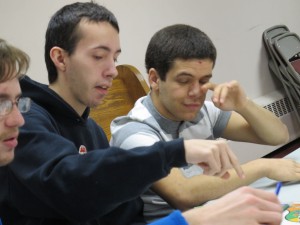 Students at a special education co-operative in Angola work to develop life skills.

Cuts to both sources of federal funding would add up to around 8 percent, Blake said. “That could have a tremendous impact,” Blake said. “I’m very concerned about it.”
For Covered Bridge, cuts would likely affect staffing, which is 90 percent of its budget. Covered Bridge has about 120 employees — administrators, teachers, aides, psychologists.

As we’ve written before, schools must provide special education services outlined in a student’s individual education plan. Those services are protected, and districts will likely have to continue paying for them even if the federal government reduces payments because of sequestration.

Indiana schools face a loss of about $12.4 million to special education services if the cuts kick in March 1.