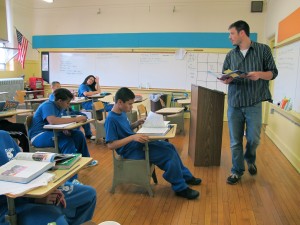 A teacher leads his class in South Bend.

We highlighted last week the results of a survey showing a precipitous drop in teacher job satisfaction over the last two years.

But at Real Clear Politics, Andrew Rotherham says the numbers took a nosedive “based on dubious polling“:

The much-touted data point about teacher satisfaction is, to put it politely, fundamentally flawed. MetLife asks about job satisfaction in different ways in different years. In 2008 and 2009 they asked teachers, “How satisfied would you say you are with teaching as a career?”

The survey didn’t ask about satisfaction in 2010, but in 2011 and 2012 teachers were asked, “How satisfied would you say you are with your job as a teacher in the public schools?”…

What Metlife did would be akin to asking a soldier on a tough deployment how he likes his job vs. asking him how he likes his career in the armed forces — and claiming that it was the same question. [Above emphasis is StateImpact’s]

While Rotherham writes “this doesn’t mean teachers aren’t facing real problems,” he adds the new MetLife numbers should have been framed differently:

That said, several teachers flocked to the comments section of our post about last year’s numbers to vent their frustrations about the profession since we posted it in March 2012. We highlight some of their comments here.

What are we to make of Rotherham’s analysis? Leave your thoughts below.