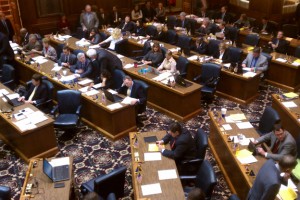 A bill that relaxes the rules for hiring superintendents passed the Indiana House 58-40 Tuesday.

“This bill in no way demeans current superintendents, most of whom I know and I have great respect for,” Huston says. “It’s simply an option for the locally elected school board the opportunity to throw the net as wide as possible for their best leader.”

But House Minority Leader Scott Pelath says the bill is not about providing greater local control.

“This bill exists because we don’t like school superintendents,” Pelath says. “We don’t like the public education community. We’re upset about some of the decisions that the voters made in the recent elections and we have to get back at them somehow.”

The bill has received widespread opposition from supporters of Glenda Ritz, though Rep. Jeff Thompson, R-Lizton, pointed out the new state schools chief doesn’t have a superintendent license and could serve a local district.

In the Indianapolis Star, columnist Dan Carpenter called out the legislation for lowering the bar for teachers and administrators:

Local control is the rationale behind House Bill 1357. The concept is fine, except there are no educational qualifications for school board membership, says Steve Gookins, a retired longtime superintendent who lobbies for the Indiana Association of School Superintendents.

“We got rid of the trustee system (over schools) years ago to get rid of cronyism,” he said. “Local control is great, but let’s set some standards. Those trained in the profession are the people who can lead. The superintendent is the last person on the pyramid who represents the child.”

The bill has the support of the Indiana Chamber of Commerce. Derek Redelman says every school district in the state has different needs and should be able to decide what qualifications its superintendent has.

“When you create licensing requirements here at the state, that … is the assumption that they’re all the same,” Redelman says. “What this does is to give flexibility to match skills to very different needs.”

The bill passed the House 58-40 and now moves to the Senate.