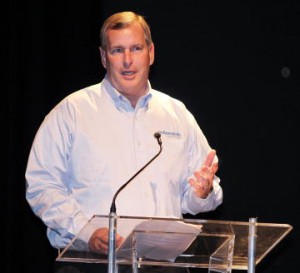 The State Board of Education will consider Indianapolis Mayor Greg Ballard’s petition to assume control of the four IPS takeover schools Wednesday.

It’s a possible win-win for the mayor, the new state superintendent and the school district, writes The Indianapolis Star‘s Scott Elliott:

Ballard has argued since even before the state took over Donnan Middle School and Manual, Howe and Arlington high schools that he should be in charge of monitoring the outside groups brought in to run them. What’s interesting was that idea had no traction until former State Superintendent Tony Bennett’s defeat to Glenda Ritz in November.

Ritz campaigned against the whole idea of state takeover, calling is privatization of public schools. She has said she never intends to exercise the intervention as state superintendent and it was clear she did not intend to continue the intensive oversight of the takeovers that Bennett’s education department had in place.

That’s good news for state board members, Elliott writes. Remember, they’re the ones that voted for the takeovers in the first place and want to see turnaround efforts succeed. And under the mayor’s proposal, it’s more likely the schools will eventually go back to IPS.

So Wednesday’s state board meeting — the first Ritz will chair — could answer one of the biggest questions about her superintendency, the future of state takeovers.

But here’s why the solution is so interesting.

We’ve written before that Indianapolis is the only city where the mayor sponsors charter schools. It’s a decision deeply rooted in the politics of school choice in Indiana and revolves around the administration of Democratic Mayor Bart Peterson, the first mayor given the authority to oversee the city’s charter schools, says Claire Smrekar, a professor of education and public policy at Vanderbilt University.

In August, Smrekar told StateImpact that when Indiana passed its charter school law in 2001, it was seen as a way to prevent further takeover of failing schools:

It shows some innovation and some real interesting ideas about the role of mayors. In the mid-1990s, there was so much rhetoric and discussion of mayoral takeovers of public school systems. The idea is look, we can’t leave it to the bureaucrats, and we can’t leave it to school boards, and the person who is best positioned to manage public resources and to move forward with a plan for school reform and school improvement might be a mayor.

It took bipartisan support to make Indiana’s charter law a reality. Smrekar says even the president of the teacher’s union signed on.

Now Ritz, a former teacher and union activist, will get to back local control for the four IPS takeover schools as the Indianapolis mayor’s office acts as an alternative to state intervention.