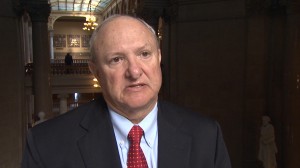 The good news: “There’s probably going to be a little bit more money than there has been,” says Sen. Luke Kenley, R-Noblesville, who chairs the Appropriations Committee.

The bad news: “That means there’s something to fight over. In the past, you could just say, ‘There is no money,'” Kenley told Indiana Public Broadcasting‘s Gretchen Frazee Wednesday.

Indiana’s public college and university presidents are at the statehouse this week making their appeals for increased funding. Their share of the budget is around 12 percent, says Kenley.

Last year lawmakers sparred with officials at state schools over tuition increases, but Kenley says he thinks there’s a “much more positive partnership” between educators and legislators this year.

“I think we’ve always got to keep in mind that the state shouldn’t be running the universities,” he says. “We need to leave that to the professionals. If we want to have some policies in place, then the state is going to have to share in the cost of implementing those policies.”

Here’s what else Kenley had to say about funding for higher education.

On paying for the 21st Century Scholars program:

That program has grown so much. We’re gonna have to put a fair amount of money in there to actually cover that program this year, and it’s going to stretch our budget in order to get that done and still be able to provide grants and loans for other students.

We’re concerned that students are graduating with so much debt that it becomes a problem for them later on. So we’re trying to make sure that debt that students take on is used for education. There are some stories — and they may be just that — that people are borrowing money and then using it for other things, other than education. So I think we’re going to probably be tightening those standards up a little bit to make sure it goes for education expenses.

In the beginning, I think the colleges and universities felt that we were infringing on their rights and they didn’t want to be told how much they could raise tuition fees. I think today they recognize it’s a bigger problem for our students and our families, so they’re kind of on the same page with us, saying, ‘Well here’s steps that we’re trying to take to make it be more affordable for people.’ At least we agree on the issue now. College is a pretty expense proposition, and it’s on the edge of not being affordable for a lot of people.