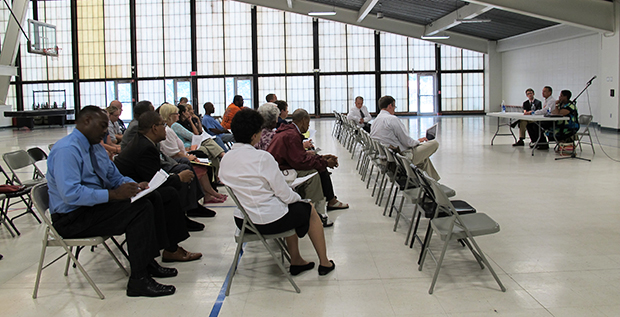 Community members listen to a presentation from state superintendent Tony Bennett in Indianapolis in August 2011.

Chances are you think your local public school is doing a good job.

That’s the main education finding of the Hoosier Survey, an annual opinion poll of more than 600 Indiana residents, released this week by sponsors WISH-TV and Ball State University.

Nearly seven in ten of those polled are either “very” or “somewhat satisfied” with their local public school. That number has slipped from its high of 80 percent in 2010.

But support for expanding the state’s voucher program has also slipped.

The Hoosier Survey showed nearly 28 percent of poll participants support the expansion of Indiana’s program for giving public dollars for children to attend private schools, down from nearly 34 percent in November 2011.

“The most significant statistic from the survey is in the percentage of people who don’t know or have no opinion about vouchers,” writes WISH-TV. “That 39% is up nearly eleven points from last year.”

The Hoosier Survey’s numbers are at odds with previous polls from school choice advocates. In a 2010 poll, the pro-voucher, pro-charter Friedman Foundation for Educational Choice found respondents supported a statewide voucher program by a 66-24 margin. More survey participants in the Friedman survey also believed the state’s schools were on the “wrong track.”

UPDATE: Paul DiPierna, who directs research for the aforementioned Friedman Foundation, took issue with the words “wary of voucher growth” in our headline. We’re keeping the headline, but in the interest of sharing another perspective, he agreed to let us post his reaction here:

Based on this survey’s responses, I would substitute ‘indifferent’ or ‘ambivalent’ as more accurate descriptors. The difference between pro-expansion and anti-expansion is within the poll’s margin of error, so no significant difference. And as you say there is a very high ‘no opinion’ response. ‘Wary’ is not an accurate description of public sentiment.