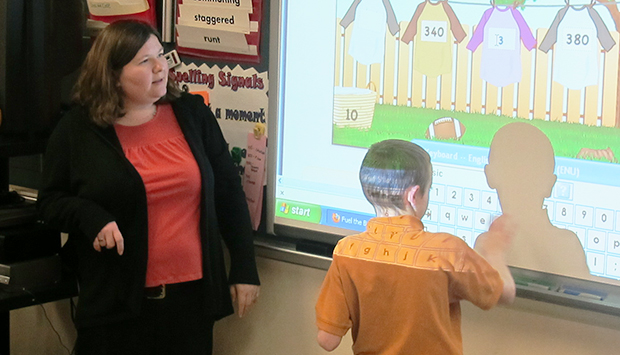 A teacher at East Side Intermediate School in Anderson directs a student as he uses a smart board in math class.

When P.J. McGrew decided to become a teacher, he was going into the family business — his mother, sister-in-law, great-grandpa and five cousins all taught or teach in schools.

“We are not respected as professionals and experts in our field.”
—Melita Walker, Carmel teacher & Ball State student

But McGrew followed a much less-traditional path to the classroom than his relatives. In college, McGrew didn’t earn an education degree — he majored in philosophy. To earn his teaching license, he simply sat for two exams and took a teaching job in Idaho after passing.

As Indiana education officials considered a package of sweeping changes to the state’s teacher licensing rules, known as “REPA II,” McGrew says his family expressed skepticism. But he pushed back.

“I asked them, ‘Did your education training really prepare you for what you encountered?’ And they were like, ‘No, you learn by the experience,’” says McGrew, now a math teacher at Herron High School in Indianapolis.

The State Board of Education approved the rules at its meeting last Wednesday before an overflow crowd.

At the urging of the advocacy group Students First, McGrew rose to speak in support of the REPA II changes. But of the nearly two-dozen speakers last week, he was one of only three people to rise in support of the new rules, which raise a question that troubles many in Indiana’s higher education institutions:

Does an education degree really make a good teacher?

‘You Can’t Just Walk In Off The Street’

While some argue there are already routes into the teaching profession for non-traditional applicants in Indiana, REPA II changes create a new pathway, known as the “adjunct permit.”

Similar to McGrew’s alternative certification, anyone who earns a Bachelors degree with a 3.0 GPA will soon be eligible to take a teaching exam to receive the permit. If they can pass the test and maintain high marks on their evaluations, they can hold down a teaching job in Indiana. To maintain their permit, they’ll also likely have to take professional development courses .

The new guidelines also remove requirements that building administrators hold Masters degrees. These changes do not sit well with some teachers and with officials at the state’s colleges of education, who publicly argued last week the new rules “de-professionalize” education by de-emphasizing the importance of higher education.

Carmel teacher Melita Walker — who is also working toward her superintendent’s license by taking courses at Ball State University — says the new rules leave a sour taste in many teachers mouths.

“We are not respected as professionals and experts in our field. You cannot just walk in off the street and be an effective teacher or instructor. You might be good with people, but you have to have the content,” Walker says.

But proponents of the new rules say the current teacher licensing process places too much emphasis on taking college courses. Derek Redelman, who watches education policy for the Indiana Chamber of Commerce, says the new rules place more focus on educators knowing the subject matter they teach.

“No matter how good your pedagogical skills, it’s not possible to be an effective teacher if you do not know the subject you are teaching. Our current system does not do enough to address that fact, and REPA represents a positive step to correcting that important oversight,” Redelman told the State Board last week. 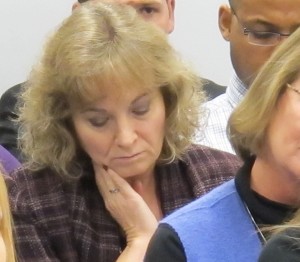 State superintendent-elect Glenda Ritz attends the December State Board of Education meeting, taking notes and listening in during the debate over the proposed REPA II teacher licensing rules. She asked the rule changes be tabled. The board declined her request.

P.J. McGrew says education is about more than what teachers learn in pedagogy courses — it’s about forming relationships with students.

“A big thing about teaching, in my opinion, is that you have it or you don’t,” McGrew says.

But Carole Craig, a former HR director for the Indianapolis Public Schools, says the new rules only ensure schools will see more applicants — but not necessarily better applicants.

Craig, who spoke on behalf of the Indianapolis NAACP at Wednesday’s State Board meeting, says she liked what she heard from McGrew and doesn’t have a problem with all alternative certification programs.

Craig says she worried more about the quality of applicants in her time at IPS — but at least the state’s licensing rules set a minimum bar.  Now, she worries the new rules will increase the quantity, not quality, of hiring pools for teacher jobs.

“So when you lessen the rules, you increase the pool, but you don’t increase the quality that serves the needs of the hardest-to-place and the children most in need,” Craig says. “That’s why it becomes an equity issue.”

That’s because the best-qualified teachers will still want to get jobs in private schools or quiet suburbs. Now, Craig fears the rule changes could exacerbate that trend; that students in poor or urban districts who will feel the largest impact of the REPA II rule changes.