A logo for Republican Tony Bennett's campaign displayed on a scoreboard at Lucas Oil Stadium, where the Indiana GOP held its Election Night watch party. Bennett, the incumbent, is running against Democrat Glenda Ritz for the state superintendent's office.

Indiana polls have closed and the waiting now begins for the state’s candidates vying to win the office of Superintendent for Public Instruction.

We have yet to see incumbent Republican Tony Bennett from our post in the end zone of Lucas Oil Stadium, where the Indiana GOP is holding its election night rally.

Earlier this evening, his Democratic challenger Glenda Ritz said she felt “positive” and expressed confidence that she will be elected.

I think I’m going to be the next Superintendent of Public Instruction, so I feel very good… I feel very positive that educators have spread the word to the voters; that we’ve been able to get out the word to all the voters.

This is the best job I’ve known. Everyday I wake up with a renewed sense of urgency to help improve education. Thank you for your support! 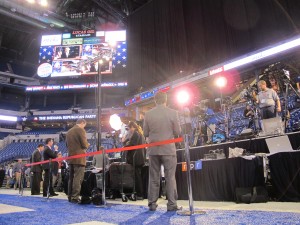 Results are coming in — you can track them on this map from Indiana Public Media.

The Indianapolis Star is reporting many long lines tied up many polling places around Marion County, The Indianapolis Business Journal reported delays in Hamilton County, and the The Post-Tribune in Gary reported “higher-than-usual” turnout.