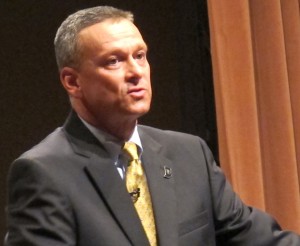 A fifth grade teacher at Indianapolis’ Arlington Woods Elementary isn’t leafleting or organizing for her preferred candidate, but that doesn’t mean she isn’t invested in the state superintendent’s race.

Tammy Laughner says she plans to vote for Republican incumbent Tony Bennett because she supports the changes he’s made to Indiana schools in the last four years.

Her ballot counters the narrative that Bennett’s challenger, Democrat Glenda Ritz, has crafted as local teachers unions have mobilized to support her — educators also plan to go to the polls for Bennett, Laughner says.

“I just think the difference is the union has been organized for decades and they have that platform to express it. But I think there are many people like myself who don’t have a platform or a way to be more vocal,” she says.

In recent weeks, Bennett has vigorously disputed charges that he is anti-teacher. He says Ritz has characterized him as an angry education reformer, but he knows he has the support of teachers across the state.

“I do believe that what we are seeing over the last six to nine months are more and more educators agreeing that things are better for Indiana children and Indiana schools even though their jobs might be a little harder,” Bennett told StateImpact in September.

“I’m talking with the heart and the passion of an actual educator and have seen what Tony Bennett’s policies have done to education,” Ritz told us in August. “That’s why I’m running.”

But Laughner says Bennett’s stance on teacher evaluations is the reason she’s voting for him.

“I think it’s quite simply because he values great teachers, and I appreciate that,” says Laughner. “I appreciate the teacher evaluation he’s put together that differentiates the levels of competency. Teachers are getting recognized now.”

Laughner’s school, Arlington Woods, is an IPS success story. After receiving an F four years ago, the school received an A this year based on the state’s new grading system. It’s in part because of Laughner and a group of teachers who developed their own rigorous curriculum and started measuring students’ progress with weekly tests. Scores on the ISTEP+ went up.

Ritz wouldn’t abolish teacher evaluations if elected, but would simply change the metrics.

“Rigorous standards and high quality teaching should be expected,” Ritz told StateImpact, but she called the link to ISTEP+ an “overstep.”

For her part, Laughner has no problem being judged based on her students’ test scores and says she doesn’t want to be “lumped in” with less effective teachers.

“I think teachers who are highly effective appreciate the testing because it actually shows their effectiveness,” Laughner says.