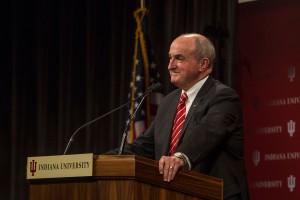 Indiana University president Michael McRobbie delivers the 2012 State of the University address at IUPUI in Indianapolis.

Indiana University president Michael McRobbie announced a graduation incentive Tuesday that would shield students who are on track to graduate from any tuition hikes in the future.

Starting next year, IU “will effectively freeze tuition for students after their sophomore year if they are on track to graduate in four years,” a statement from the university read.

McRobbie announced the incentive during his 2012 State of Education address on the campus of IUPUI in Indianapolis.

“This award makes two things clear: That we are serious about holding down the cost of an IU degree,” McRobbie said in his speech, “and that we are equally serious about providing tools and incentives to help our students stay on course for on-time degree completion.”

McRobbie acknowledged the immense external pressures to keep students’ costs of attendance low despite declining state expenditures on higher education. From his speech:

While often viewed with skepticism within the academy, the unavoidable fact that we all have to come to terms with is that without making a serious commitment to becoming more efficient, we cannot add significant resources to the research and educational missions of the university since every one of our five major sources of IU’s revenue is under pressure or threat…

Major increases in tuition are out of the question: the market and public will no longer bear them.

In the past, Indiana University has rolled out similar incentives aimed at saving students money while simultaneously promoting on-time graduation.