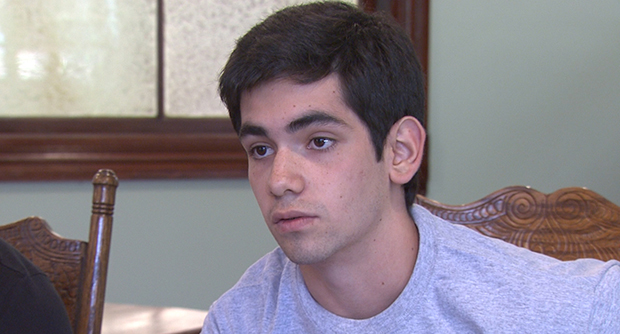 Senior Jose Valdivia of Bolivia came to Kokomo because he thinks going to an high school in Indiana will make it easier to get into an American university. Valdivia, who wants to study engineering, says his top picks are Purdue and Texas A&M.

With per pupil funding decreasing in Indiana, educators are searching for ways to generate revenue. In Kokomo, one district has turned an abandoned building into a residence hall for international students — a concept largely untried among public schools in the state — hoping to bring in more than a quarter million dollars for the school corporation and potentially much more for the city.

For much of the last four years, Kokomo city leaders, from Mayor Greg Goodnight on down, have been working to help the community recover from a recession that left one in five residents jobless and made the city the subject of news coverage documenting its woes.

“When the families come over, if the mom or the dad is a businessman or a businesswoman for a company internationally, and they say ‘this might be an idea to develop, foster relationships in the short term,’ then that’s a side benefit as well.”
—Jeff Hauswald, superintendent

“Whether people accept it or want to accept it or not, we live in a global economy,” says Goodnight. “And the more that we can do to diversify our businesses, diversity our industry and also diversity our population, I think it’s only going to be a benefit for us.”

It’s a mantel recently taken up by Kokomo-Center School Corporation officials. They needed more money to expand AP class offerings and help fund an international baccalaureate program — all during a time when competition for students among Howard County’s five school corporations has never been more fierce or funding hard to find. Neighboring corporations are sending buses into Kokomo to bring students outside the city for class. The schools in the city are buying billboard space touting their accomplishments in hopes of making parents choose one district over another.

So they’re building enrollment — quite literally by building. In downtown Kokomo, carpenters hammer intricate wood molding into space above doorways and bulldozers move dirt and debris outside the dorm in anticipation of the students’ arrival. Kokomo-Center officials contracted with a local architect to lease and refurbish what was once a candy store — run, appropriately, by immigrants to the city in the early 1900s.

Superintendent Jeff Hauswald sees the candy store as an apt metaphor, as his corporation will get a quarter-million additional dollars this year from tuition paid by 22 international students — most of whom will live in the dormitory the one-time sweets shop has become. But Hauswald hopes for more. He says when discussions began between school and city leaders about fixing up the building, they quickly came back to the city’s ongoing theme of economic rebirth.

“The more ideas they get and the more they see the value on the dollar for north central Indiana, we hope they’ll develop connections and relationships and develop ideas and want to come back here and invest in Kokomo down the road,” Hauswald says. “It would definitely be a long-term investment, but we think the likelihood is there.”

But to fund international travel and a $13,000-a-year tuition bill, international families will likely have to have some financial means — which might mean near-term investment, too.

“When the families come over, if the mom or the dad is a businessman or a businesswoman for a company internationally, and they say ‘this might be an idea to develop, foster relationships in the short term,’ then that’s a side benefit as well,” Hauswald says.

Senior Jose Valdivia traveled to Kokomo from his native Bolivia, where his grandfather is the head of a cultural agency which is paying his way.

“My mom only has to send me money from Bolivia each month,” says Valdivia, who hopes attending an Indiana high school will break down some procedural roadblocks to getting into an American university. “I intend to apply to Purdue or Texas A&M — either — because I want to study engineering. So it’s kind of easier to apply while you live here,” he says. “So it’s a perfect chance.”

There aren’t many — if any — rules for how the international dorm may be run. Once Kokomo-Center officials determined no taxpayer dollars would be spent on the international students, they knew didn’t need any sort of permission from the state to proceed. Still, Indiana Department of Education spokesperson Alex Damron says his agency will be keeping tabs on how well the idea works.

Damron couldn’t say whether the department supports the idea of charging international students for tuition, room and board as a means of coping with cuts to public education funding, but does say superintendents must be careful not to increase class sizes.

And in Kokomo, the former candy store will soon be resurrected — both figuratively for the city and literally. Culinary arts students are set to spend a few days a week behind a recently reinstalled store counter. They’ll complete the economic development cycle selling the sweet treats they bake up.