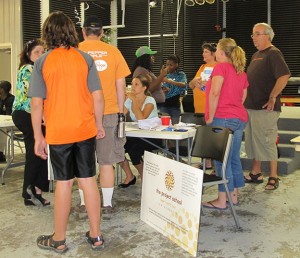 We’ve been following the debate over the fate of a charter school in Indianapolis that highlights a difficulty in meshing school choice and accountability statewide. The latest in the case from Indiana Public Media:

Leaders of Indianapolis’ Project School Board of Directors say the school‘s case against the city has been moved to Federal Court.

Baron adds the move to federal court means the school remains in limbo. No word yet on when the case will be heard in federal court.

“Of course, there is a due process claim and that’s a constitutional issue. The real problem for us is it slows the process down,” Project School board president Daniel Baron told StateImpact Friday. “We were going to have a hearing Monday in superior court. That has been changed to the federal courts. Every day hurts as we move closer and closer to school.”

StateImpact sent reporter Julie Rawe to the fair and she wrote this account of the enrollment fair:

A dozen parents from The Indianapolis Project School and their kids stood outside an enrollment fair Thursday evening holding handmade signs reading “We Choose TPS.”

Some parents told me they wouldn’t be going anywhere near the charter school enrollment information tables at the event. Others told me that they might, but only to take a look.

But the reality is that some parents were feeling like they had to check out those enrollment tables, not because they want their kids to leave The Project School but because they’re afraid the school they’re trying to save won’t be open when their kids go back to school. Parents were taking a look at those other options, sometimes half-heartedly, and some of those parents say they put their kids names down at other school just in case.

Some of the charter school representatives say they don’t have many spots open for new students, but they’re willing to open their doors to Project School kids because they realize parents are stuck in a tricky situation. And some say, even if they don’t have space in a particular grade, they’ll go to bat for kids from The Project School if they find themselves without a school.

Baron told StateImpact that parents of 220 students have signed a letter stating their intent to enroll. He says the school is proceeding as though they’ll be allowed to open as planned Aug. 6.