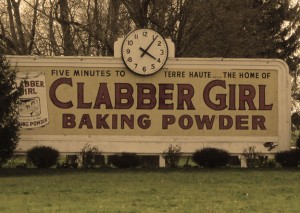 Terre Haute has a problem: There aren’t enough young professionals willing to put down roots there to keep the city’s economy vibrant.

At least that’s how Tribune-Star columnist Mark Bennett sees it. And young professionals have their own problem: They have student loan debt to pay off, and “opportunities look far better in large, metropolitan areas.”

Indeed, brain drain is a statewide issue, not just a local one. Fewer than half of the graduates from the state’s public colleges and universities between 2000 to 2005 remain in Indiana today, according to one report.

So for Terre Haute, and for other small Indiana communities, Bennett has a potential solution: Convince young professionals to stay in small communities by paying down their student debt.

Sound crazy? Bennett says it’s been done before. Niagra Falls, N.Y., he reports, hopes to curb declines in its population by offering to pay $7,000 in student loan assistance to any college graduate willing to stay there for two years.

Bennett might have even looked to Grant County, Ind., where a public-private economic development partnership offers college graduates up to $5,000 to purchase a house in the county, or $2,500 in rent incentives.

Bennett admits initiatives similar to those in Grant County or Niagra Falls, N.Y., aren’t economic cure-alls, but he says they could work elsewhere in Indiana:

Lots of small Midwestern cities struggle to attract prospective residents in the early stage of their careers. Towns located in “the Rust Belt” boomed in the early 20th century, offering solid, lifelong manufacturing jobs to workers straight out of high school. A half-century later, those cities still crave sprawling factories that employ hundreds, but in day-to-day reality survive best with a diversified mix of smaller employers with a few dozen folks on the payrolls. Thanks to energetic economic development efforts, Terre Haute has fared better than most. Still, populations in those places, including Terre Haute, peaked around 1960, as Baby Boom families grew, and have since dwindled.

Today, those cities rely on the Baby Boom kids — now in their 40s, 50s and 60s — for the bulk of their labor forces, volunteerism and charitable giving. The missing piece of the communities’ demographic puzzle is the young professionals; it’s hard to lure them to towns where the steadiest longtime job providers shut down in the 1980s, ’90s and 2000s… 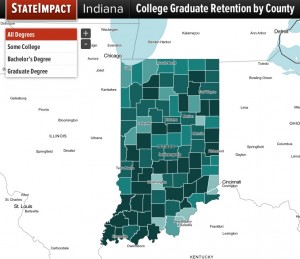 Click on the image above to view an interactive map showing the home counties of Indiana post-secondary graduates and the rate at which students from those counties remained in the state after earning their certificate or degree.

Such a pay-to-stay program won’t appeal to all young professionals. Some will be more inclined “to accept short-term poverty to live in New York City or Chicago” by working a job outside their field, Heathcott said, instead of moving to a small, unfamiliar city. Others, though, want a meaningful start to a career ASAP and would take the deal. Those are the people who could help jumpstart a local economy in a community willing to, in turn, help lessen their personal deficit.

Bennett isn’t the only one advocating a local brain drain solution that starts in college. A Kokomo Tribune editorial in June floated the idea of free college at one of Kokomo’s public college campuses for all local high school grads.

What do you think of Bennett’s idea?

(While you’re at it, take a look at our interactive map detailing the rate at which students in different Indiana counties remain after earning post-secondary degrees in the state.)