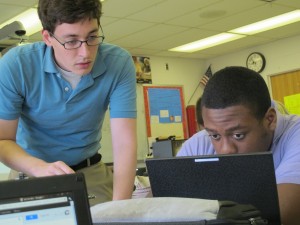 Here’s an interesting look at the common practice of awarding an automatic pay increase to teachers who earn advanced degrees. From The Center for American Progress:

Nationally, school districts paid out about $8.6 billion in so-called “master’s bump” compensation during the 2003-04 school year. By 2007-08, the last year data was available, that amount had increased 72 percent, to $14.8 billion.

In Indiana, where about 63 percent of teachers have master’s degrees, spending that year on compensation tied to advanced degrees amounted to $164 million. The salary boost for getting a master’s degree varies, but the statewide average was $3,830. (State-level data came from a staff survey published by the National Center for Education Statistics.)

The authors of the brief, Raegen Miller and Marguerite Roza, say that as school districts across the country tighten their belts, the merits of linking compensation to educational degree attainment should be discussed but almost never are.

“In an era of especially scarce resources, it is certainly a discussion worth having,” they write.

But teachers have been resistent to the idea in the past, writes Stephen Sawchuck for Education Week, which is ” … an understandable phenomenon given that, while some districts offer tuition reimbursements, many other educators have had to foot the cost of earning the degree on their own.”

Sawchuck points out the time period in question predates the recession, when more schools were still hiring. Costs may have fallen in the intervening years due to layoffs and salary freezes, he adds.