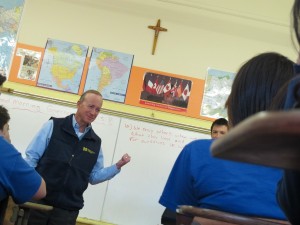 Gov. Mitch Daniels speaks to a group of students at Our Lady of Hungary Catholic school in South Bend.

Only one in five of the private schools in Indiana’s new school voucher program had a passing percentage on this year’s ISTEP+ exam lower than the statewide average.

But that relative handful of voucher schools with below-average test scores is getting a disproportionate share of state voucher dollars.

According to an analysis by StateImpact, each of the 171 private schools posting higher-than-average ISTEP+ passing percentages received, on average, 12.3 vouchers and nearly $48,000 in state voucher money.

Compare that to the 41 private schools posting lower-than-average ISTEP+ passing percentages: Each of these schools received, on average, 29.9 vouchers and nearly $124,700 in state voucher money.

What these numbers mean isn’t exactly clear, but the analysis could have a few potential implications.

It could back up criticisms of those who say the voucher program siphons state dollars away from public schools, sending them to private and religious entities who do no better in educating children.

But the average ISTEP+ pass rate at all schools receiving vouchers (80 percent) was 9 percentage points higher than the state’s overall average.

Lindsay Brown, the executive director of School Choice Indiana, also notes some of the schools in the voucher program were taking the ISTEP+ exams for the first time this year.

The analysis could also indicate voucher schools are seeking out a student population that’s already been underserved.

Robert Enlow, president and CEO of the Indianapolis-based Friedman Foundation, a national pro-charter and pro-voucher organization, says voucher recipients often come from public schools where test scores are below the state average as well.

“While [some voucher schools] are not up to the state average, in some cases, they definitely — at least in the Indianapolis area — are way above the IPS average, dealing with often the same population of students in the voucher system,” Enlow tells StateImpact.

While most Indianapolis voucher schools perform significantly better than the IPS average, at least a dozen other schools have scores well below not only the state’s average passing rate, but below the passing rate for the public school district where they’re located.

Enlow says the state’s voucher law is written so that underperforming private schools cannot be eligible for state dollars if their scores do not improve over time.

“We need to continue to provide help to them to get them up to state averages and higher,” he says. “We expect that they’ll be able to respond faster than the traditional sector to deal with quality issues.”