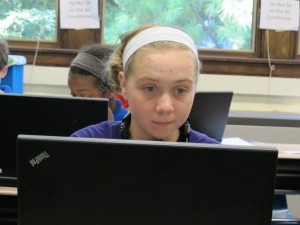 Online testing was such a debacle that voters threw the state superintendent of education out of office and the state sued Pearson, the company hired to administer the test. (The state reached a $5 million settlement with Pearson, but the outgoing governor decided not to sign it and obligate his successor to the deal.) The state went back to old-fashioned paper, which it still uses.

State officials felt confident moving forward with the tests in 2010 because Wyoming has a solid internet infrastructure and trial runs went smoothly. They didn’t expect the network to collapse under the weight of 80,000 students trying to log in at once.

Still, states and school districts are pressing forward. There’s a multi-state push to get the majority of kids taking online math and English tests within three years, writes Sarah Garland for The Washington Post:

Some education reformers and technology experts are hailing the move, which has the backing of the Obama administration, as a revolution. They are promising more well-rounded tests, less frequent cheating and immediate feedback for both students and teachers as students’ answers are transmitted quickly over the Internet to states and the results are then sent back to districts.

But other educators and experts point to a host of potential problems. Shrinking school budgets could make it difficult for districts to purchase new equipment, and states that pioneered online tests have dealt with network meltdowns. Some worry that the move to online testing could take time away from learning.

In Wyoming, teachers complained that the testing tied up computer labs for weeks, meaning they couldn’t use them for actual instruction. Some schools had outdated equipment that was incompatible with the testing software.

Indiana Is Ahead Of The Curve For Tests Taken Online

Of course, Indiana is already testing more students online than most states, Zach Foughty, director of college and career readiness for the Indiana Department of Education, told StateImpact earlier this month. The state began making the transition in 2010, when it required schools to test at least one grade level online.

“It’s great to be able to test online, but we wouldn’t be asking schools to spend so much on technology just for the purpose of assessing. We know that’s how students learn.”
—Zach Foughty, IDOE

Foughty says the ability to test students online has been invaluable in the first year of the state’s high stakes reading exam. He says students can have their results back in about a week, which helps schools identify how many retakes they’ll have to administer.

Still, there are perils. Peggy Shidaker, director of curriculum at Knox Community Schools, tells the story of a student who got so nervous during testing this spring she threw up on the keyboard.

“Everyone kept asking me what we should do, so I said, ‘Take her to the school nurse.’ What else are you going to do? She was done testing,” Shidaker said.