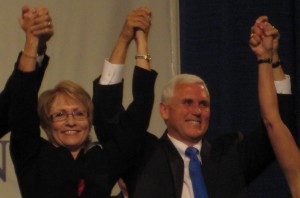 With state Democrats set to nominate John Gregg to top their ticket this weekend, Pence’s policy rollout provides a chance to compare where the two candidates for governor stand on education.

“We cannot succeed in the marketplace if we fail in the classroom,” Pence, a five-term U.S. House member, told the GOP convention Saturday. Conservative blog Hoosier Access has the full text of his address:

Our schools must work for all of our kids regardless of where they start in life and regardless of where they want to start their careers. This means our next goals must include improving the reading and math skills of elementary students, increasing graduation rates, and improving the quality of Indiana’s workforce until the Hoosier state has the best educated and the best skilled workforce in America. That will mean holding students to higher standards, where every fourth grader can read, where more kids are succeeding in the math and science courses so critical to finding a good-paying job. And I believe the time has come to make vocational education a priority again in every high school in Indiana.

At least when it comes to education, Pence would likely continue the policy direction of Gov. Mitch Daniels’ administration. As the The Associated Press points out, Pence did bring a former Daniels’ education aide onto his staff.

But Pence did signal an interest in expanding access to preschool in an interview with The Elkhart Truth in April. (Indiana is one of only a few states left that doesn’t fund its own Pre-K program.) 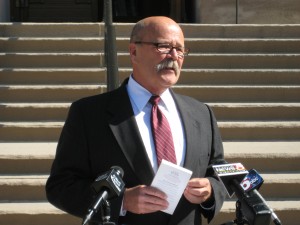 Democratic gubernatorial candidate John Gregg speaks at a press conference on the steps of the Indiana statehouse June 8.

As for where Democratic candidate John Gregg — a former Speaker of the Indiana House — stands on education, here’s what he said in a statement Democrats for Education Reform Indiana released in January:

We must create a sense of urgency about closing achievement gaps, raising expectations for a changing economy and ensuring fiscal transparency and equity. We must make Indiana the leader in teacher quality – in terms of preparation, retention, and recognition, and by making teachers leaders of our state’s schools. We must give teachers the flexibility to innovate in their own classrooms, instead of forcing them into ‘one-size-fits-all’ solutions… But unlike my friends in the GOP who run Indiana today, I will not demonize, marginalize or punish our teachers in the process.

But as Doug Martin seems to suggest at The Common Errant, the difference between Gregg’s and Pence’s education stances may not be great enough for some liberals’ tastes.