A commercial for the National Math & Science Initiative, paid for by program sponsor ExxonMobil. The NMSI is backed by high-profile foundations and corporate sponsors, listed here.

If you watched The Masters golf tournament last Sunday, chances are you noticed this commercial.

You remember it: blue screen, swirling pictures of countries, something about 25th in the world in teaching math and science, and doing something about improving that standing.

On Sunday, you watched that commercial for the National Math and Science Initiative between bites of Easter ham and egg hunts.

On Thursday, the initiative came to Indiana to announce a partnership with nine high schools and state education officials aimed at increasing the number of students taking Advanced Placement tests.

State superintendent Tony Bennett made the announcement at the statehouse on Thursday. The Indy Star has a recap:

Bennett announced a partnership with the University of Notre Dame and the National Math and Science Initiative aimed at increasing the number and quality of AP courses across the state, especially in math and science.

The program will focus initially on nine high schools, including Perry Meridian, Southport, Speedway and Pike. The goal is to expand to 33 schools within five years.

“It is the focus of this administration,” Bennett said, “that we lead the nation in AP”…

Along with Indiana and Colorado, which also just signed onto the national AP program, there are six other states involved in the budding national effort to grow AP. In Indiana, schools were picked after site visits to gauge readiness and buy-in.

The Indiana Department of Education has put increased focus on increasing students’ participation in college-level courses — even adding a high school’s passage rate AP exams as a metric that counts towards its state letter grade. But is that increased focus a good thing?

On one hand, GOOD Education writes about a College Board survey suggesting too many students aren’t enrolled in an Advanced Placement course, even though they have the potential to succeed in one:

[The College Board] analyzed the performance of 771,000 PSAT-takers from the class of 2011 and discovered that 478,000 students—over 60 percent—did not take an AP exam even though their test scores indicated they could do well on one. In particular, the College Board found that high scoring students from black, Latino, and Native American backgrounds are “much less likely than their white and Asian peers” to take AP exams. 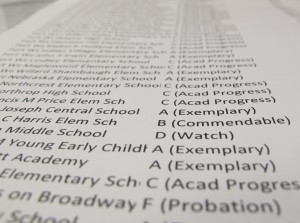 But writing in a New York Times point-counterpoint feature, Virginia teacher Patrick Welsh — an AP Literature and Composition instructor — disagrees with that assessment:

The College Board is shamelessly pressuring public schools by creating the impression that AP courses are the only ones worth taking… In the last 10 years, Advanced Placement has become a game of labels and numbers, a public relations ploy used by school officials who are dumping as many students as they can into AP courses to create the illusion that they are raising overall standards and closing the gap between whites and minorities. In fact, they are doing just the opposite.

A word about the National Math & Science Initiative, which is furnishing the $7 million grant to pay for nine Indiana high schools to offer more AP courses: It’s a huge national effort, funded by top-name corporate sponsors and foundations, from ExxonMobil to the Bill and Melinda Gates Foundation, to the College Board, to AT&T.