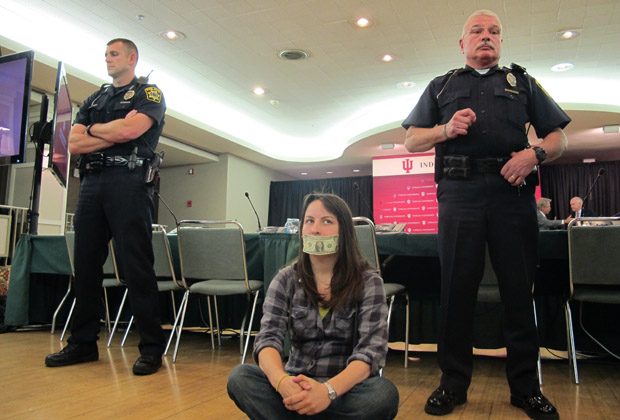 A protestor sits on the floor as Indiana University police officers monitor roughly two dozen people, mostly students. They were occupying a meeting of the IU Trustees on the Bloomington campus. At the time of this photograph, the trustees were adjourned for a break before their second committee of the day.

Concerned about increasing tuition and questioning the legitimacy of Indiana University’s top governing body, roughly two dozen protestors — mostly students — ‘occupied’ a meeting of the school’s Board of Trustees on the Bloomington campus Thursday afternoon.

Though the meeting was stopped at one point to allow student trustee Cora Griffin directly address the protestors, university spokesperson Mark Land says the board continued its meeting as the group chanted. 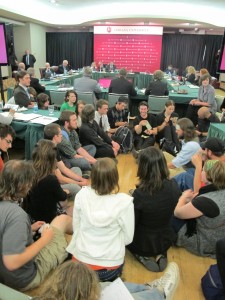 Protestors 'occupy' a meeting of the IU Board of Trustees, demanding lower tuition and questioning the governing body's authority.

“It’s been a little challenging. The noise level is higher than usual, but I think we’ve been able to get through the business at hand,” Land said.

Group members variously aired grievances about administrator pay, the university’s coal power plant, and about what they said was a lack of a student voice in university government.

The group Occupy Bloomington tweeted about the protest.

Among the group’s grievances that should be familiar to StateImpact readers: the rising cost of attending school.

Greven pointed to this year’s 5.5 percent increase in students’ costs of attending school. That increase in costs comes from a university-wide tuition increase coupled with new mandatory building fees the university says are necessary to address a backlog of building projects.

UPDATED: An earlier version of this post stated the student organization Coal Free IU “sent out a press release after the protest saying they would return to Friday’s meeting as well.” To clarify, while the group’s spokesperson stated several members are also active in the Occupy movement, Coal Free IU did not organize the sit-in protest. The press release they sent was for an earlier event that did not disrupt the trustees meeting, described here. They will hold a similar protest, not an ‘occupation’, on Friday.