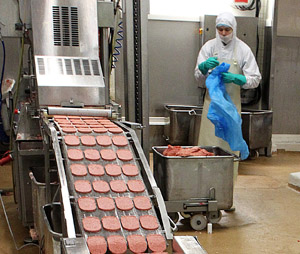 An employee in a meat processing facility making frozen hamburger.

Headlines about “pink slime” — a term critics coined for an ammonia-treated beef filler — have turned heads and stomachs nationwide this week, starting a debate over whether the product has any place on a school lunch tray.

But there’s an inconvenient truth in the debate that’s no small matter to many school districts squeezed by shrinking budgets:

It’s the white (or pink?) elephant in the room through every school lunch controversy, from chocolate milk to pizza-as-a-vegetable: Can American schools serve a healthy school lunch at a reasonable, affordable price?

Can you serve fresh, healthful meals each day to millions of kids without breaking the bank, or must you resort to serving up deep-fried, processed, less expensive junk? For more than a decade, big food thinkers have chewed on this, making it a cause célèbre. But most often they find that feeding kids well requires one simple thing: more money. The federal government pays, on average, $2.68 per child per meal – and most food advocates say that simply isn’t enough. A few insist it can’t be done for less than $5.

For the record, the beef producer industry is urging calm. “[Beef filler] is not scraps of meat off the floor, it is not dog food — just meat that we couldn’t previously remove with a knife,” one beef producer responded.

“You can’t differentiate beef from beef,” an industry spokesperson told AP food editor J.M. Hirsch — except one type of beef usually costs less than the other. Hirsch writes that “minimally processed” ground beef costs $5.99 per pound. Beef with filler products costs $3.09 per pound.

“If you just don’t have the money and you’re a small district, you don’t have the money to buy the extra fruits and vegetables — then it’s going to be tough until someone tells you,’You have to do it,'” Bolin said last month. (She was reacting to an Obama administration push for more nutritious school lunches, not the beef debate specifically.)

The New York Times reports the number of Indiana fourth graders eligible for the federal free and reduced price school meals program has increased 10 percent since 2007.

But is it false to associate healthier food with higher costs? Pat Ferguson writes in The Virginian-Pilot:

The mentality that healthy is more expensive than unhealthy is simply a misguided mentality. Here’s why: Brown rice is no more expensive than white rice. Steam vegetables are cheaper and easier to prepare than french fries… Bottled water purchased in bulk would cost about .12 to the average consumer. If purchased in mass quantity, the school system could probably get that cost below .05 a bottle (much cheaper than sugar filled juice)… Fresh fruit supplied by local farmers would help stimulate our local economy versus canned fruit dripping in preservatives and sugar. 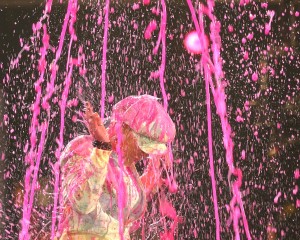 Pink Slime! Also, the musical artist Pink getting "slimed" at a Nickelodeon event.

Maybe the solution is that we just eat less meat! As Sarah Wu — who isn’t a vegetarian — blogs at Fed Up With Lunch:

The meat industry is wants to get every last snippet of beef and gristle to market. Go ahead and rescue all usable parts of the cow – but try to skip ammonia and don’t give them to my students. I have to wonder though — if the USDA goes ahead and disavows the use of “pink slime,” what will replace it? Another flavor of slime?…

So, USDA? If you read my blog, I’m going to suggest that instead of ammonia-rinsed beef that you purchase more beans. How about 7 million pounds of beans? Beans are already a USDA-recognized protein and we already know that we need to be eating more plant-based protein. Hey, I love meat and eat beef about once a week (chicken, turkey, bacon, and sausage round out the week). But we all should be trying to eat less meat for our health and for the health of the planet.

How do you think Indiana districts should respond to this latest debate over school cafeteria food? (Oh, and by the way, does this make you hungry?)