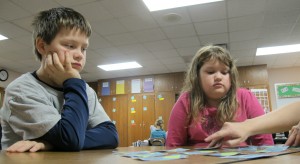 After months of preparation, high-stakes statewide testing season has kicked off in Indiana.

On Monday, hundreds of thousands of children began taking the ISTEP, the state’s benchmark standardized test for students in Grades 3-8.

So what’s at stake? What questions will students have to answer? As students break the seals on their test booklets and sharpen their Number Two pencils, here’s what you need to know: