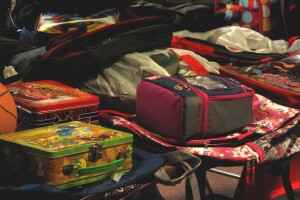 Critical though they may be in the Obama administration’s effort to combat childhood obesity, some smaller school districts worry new federal health guidelines for school lunches could come at a high cost.

Millspaugh says BCSC offsets the cost of obtaining healthier food for the children by using locally grown produce in a farm-to-school program. But she says changing the content of school meals could be a financial burden for some school districts.

“While some schools have already gone ahead and made some proactive changes—I feel that our corporation is one of those—many are still trying to figure out how they can make some of these changes under the tighter budgets,” Millspaugh says.

But the Obama administration touts the nutritional benefits of the new rules. And Jessica Donze Black, director of the Kids’ Safe and Healthful Foods Project, told EdWeek’s Politics K-12 blog she thought the new rules were significantly better for children:

The updated nutrition standards for school meals are now in line with the most recent Dietary Guidelines for Americans, the federal government’s evidence-based guidance to promote health, reduce the risk of chronic diseases and decrease the prevalence of obesity. The focus on improving school meals comes at a critical time for children’s health. Nearly one in three adolescents in the United States today is overweight or obese, and young people increasingly suffer from diseases such as diabetes and high blood pressure.

The potential added costs come as a down economy forces more families turn to the government for help in paying for their students’ school lunches.