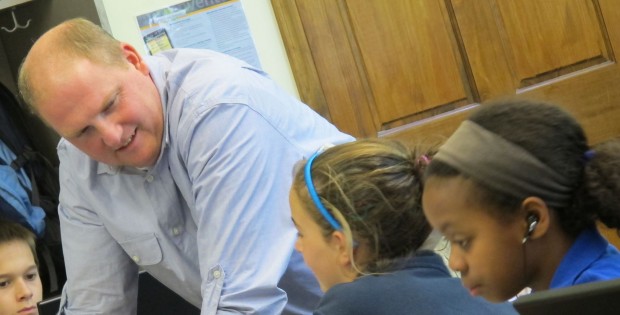 Troy Cockrum, a middle school English teacher at St. Thomas Aquinas in Indianapolis, is introducing "Google 20 percent time" in his classroom. His students can use one day a week working on any project they like — from a documentary to a screenplay, he blogs — so long as it's relevant to his class.

For one day a week, students in Troy Cockrum’s middle school English classes will get free reign.

“I gave them no rubric, no accountability lecture, nothing,” he blogs. “Just said that I’m hoping to get some creative and unique projects from them.”

Cockrum, a teacher at Indianapolis’ St. Thomas Aquinas school, says he introduced his version of “20 Percent Time” to his students this week. Cockrum is giving each of them one day each week to work on anything — really, anything — they’d like, so long as it results in a project that’s relevant to his class.

Cockrum recounts on his blog the interesting reactions he heard from his students upon introducing “20 percent time” in his class:

My 7th graders were the first to learn about the project. Tons of questions began to fly. What do you mean any project we want? I threw out a few ideas (screenplay, documentary, etc.). How do we tie it to English? My answer was, “Why don’t you just decide what it is you want to do for a project, and I’ll help you tie it into English?” I didn’t want to tie their hands at all. There were a lot of questions about what they could do, but not one single question about grades, points, rubrics or anything. I was surprised and impressed that my students were already embracing the idea.

My 8th graders had the same initial response. Really? You mean, we can do anything we want? Yep! Finally, a student asked, “How many points is this worth?” I just responded, “I’ll get to that.” and moved on. The question didn’t come up again. Later in class, while the students were working on their current assignment, I pulled the student aside and explained to her why I don’t want her focused on a grade. I just told her to focus on the project and have fun with it. She got it once I explained “the research” behind it. Quite simply, I told her, I want this to be an outcome or learning goal and not a performance or grade goal.

On their first independently-driven work day, Cockrum says he found a few kids goofing off on their computers. Others were using the time to catch up on homework — not exactly what he was hoping for.

He’ll have his students write blog posts to catalogue their progress, but Cockrum knows the project will be difficult for some of his students, he writes.

Cockrum’s students are already used to independent work. StateImpact visited Cockrum’s class in October for a story on “flipped classrooms.”

Ask a kid what they want for their birthday, and they’ll tell you 10 things. Ask them what they want to learn? They don’t know, because they’ve never been asked. They’ve been taught to follow the rules and jump through prescribed hoops set by authoritarians who know what’s good for them. They design a school day to ensure that all kids get the same “basics” and manage their day to deliver it to them. How can we expect more from students at the end of that journey?

Maybe if we asked and then gave kids permission to do some of the things they’d love to do throughout their academic careers (K-12), we wouldn’t be so lost and confused in college or in life.

What do you think of Cockrum’s idea?