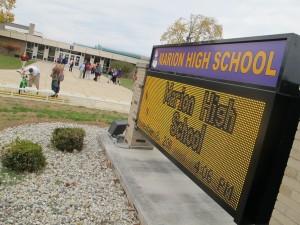 Marion High School in Grant County. State education officials worked with district administrators and school leaders to draw up a plan designed to keep the school from falling subject to state takeover.

Indiana schools of all shapes and sizes — urban and rural, big and small — could be getting a knock on the door from state turnaround employees if their test scores aren’t up to snuff.

Indiana’s education leaders say they want to be “more proactive” in turning around the state’s worst-performing schools before takeover becomes necessary — not just the two dozen schools on the state’s failing list, but the 100 to 150 schools with the lowest performance scores.

‘A Culture of Low Expectations’

Stephen Edwards says the Marion school district was like the “wild, wild west” when he took over as superintendent in 2009.

“Trust between teachers and students and between administration and some teachers is missing,” an independent school review of Marion High found in 2009. “This lack of trust has contributed to a culture of low expectations.”

Marion teachers union chief (and Marion High School teacher) John Clayborn points to a decade of poor management as the source of the problem, with a revolving door on the superintendent’s office and a hostile school board.

“We had two or three principals at the high school that weren’t really that great. Morale was down, and that affects how you teach,” Clayborn says.

State Intervention ‘Made My Job Easier’

Just before the 2010-11 school year, with Marion High entering its fifth year on the state’s failing schools list (it could face takeover over after six years), the Indiana Department of Education decided to step in.

“The state superintendent comes in and says, ‘Do you want us to run your school, or do you want to run your school?’ I took offense to that. But the thing that I loved about our faculty, was that we could have sat there and blamed them, and done everything else, but it wasn’t going to do us any good.”
—Terry Lakes, Marion High School teacher

State officials drew up an agreement with Edwards: Marion High School teachers would submit to annual independent evaluations and work to boost the passage rate on state tests by at least 10 percentage points. In exchange, the state would help set up programs in the school to mentor teachers while providing them with useful data on student performance.

When the state letter grades came out before this year, the school’s scores had improved — not as much as they had agreed with the state — but enough to pull Marion High off the failing schools list and avoid takeover.

Edwards credits the state’s intervention as instrumental to the school’s turnaround.

“They made my job as a superintendent so much easier.  We were gonna tackle these things anyway, but what [state superintendent] Dr. [Tony] Bennett did and what the DOE did was it gave me a license to do some very unpopular things,” Edwards says.

Clayborn says morale in the building has improved greatly.

“I think you can see it in the kids, I think the kids are trying harder,” Clayborn says.

Can It Work Elsewhere?

Most stakeholders in Marion High School’s turnaround say duplicating the success of the state’s intervention would require replicating an extraordinary confluence of circumstances — including the arrival of a superintendent who was intent on improving relations with the teachers union.

Terry Lakes, chair of the high school’s English department, was one of several Marion educators to term the developments of the past year-and-a-half a “perfect storm”:

“We have a superintendent, we have a [school] board that’s very open to [an intervention], and the state superintendent who comes in here and says, ‘How can we do this together?’ As I look back on it, it was a lot of hard work, and there was a lot of late nights and a lot of rolling up your sleeves,” Lakes says.

“I know other schools that are not doing this, but they weren’t under the gun as we were,” Lakes adds, referring to the looming threat of state takeover.

Clayborn, the local union chief, says the teachers unions in other districts facing similar situations were not as willing to sign similar agreements with the state. He believes teachers still harbor a distrust for state education officials, largely because the Indiana State Teachers Association and the Indiana Department of Education are entrenched in political battles over education policy.