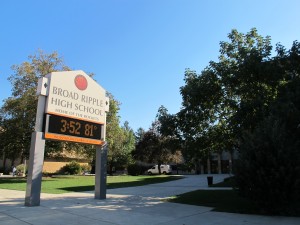 Broad Ripple Magnet High School for the Arts & Humanities, one of four magnet schools in the Indianapolis Public Schools.

Indianapolis Public Schools administrators believes they’ve found a new way for the district to compete in the ever-freer marketplace for state-funded education in Indiana: play up the district’s magnet school offerings.

With school vouchers and charters gaining the most attention from education policymakers in recent years, magnet schools seem to have gotten lost in the shuffle. But is it possible magnet schools could be a better way to improve student performance than either vouchers or charters? 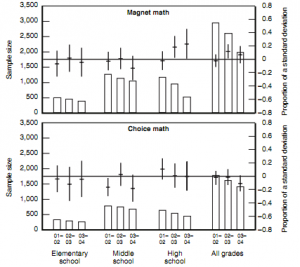 Study from the Public Policy Institute of California found that magnet schools had a higher positive impact on math scores than "choice" schools generally (schools other than the public school a student would attend based on district boundaries). The "crosses" on the chart indicate scores.

Other studies haven’t been so conclusive.

A Chicago teacher wrote in the New York Times that, by attracting the highest-performing students into magnet schools, mainline public schools suffer:

When educational leaders decided to create magnet schools, they didn’t just get it wrong, they got it backwards. They pulled out the best and brightest from our communities and sent them away. The students who are part of the “great middle” now find themselves in an environment where the peers who have the greatest influence in their school are the least positive role models… What should have been done was to pull out the bottom ten percent. Educational leaders could have greatly expanded the alternative school model and sent struggling students to a place that had been designed to meet their educational needs. Now, hundreds of millions of dollars later, we are no closer to meeting the needs of the struggling student.

Whether or not magnet schools work better for students than other options, IPS’s efforts to highlight its magnet school options are now all the more crucial to keeping its students from looking elsewhere.

While IPS superintendent Eugene White says the district’s enrollment decline was one of the lowest in years, this is largely because of outreach efforts to bring back students who had dropped out or left for charter schools. IPS lost more than 600 students to the state’s voucher program this year.