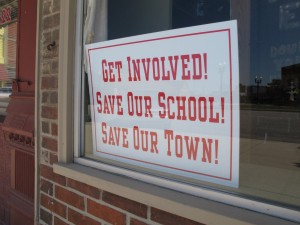 During his presentation, Sheridan Community Schools board member Todd Roberts claimed that school closures would be hard on many Indiana small towns.

School officials at many of Indiana’s smallest districts are having a hard time balancing their checkbooks. There is mounting evidence that this is part of a concerted effort by Governor Mitch Daniels and the General Assembly to force consolidation onto districts with fewer than two thousand students. For the few attempting a referendum, it’s a battle for survival.

About a half hour north of Indianapolis at a Sheridan Community Schools PTO meeting, board member Todd Roberts says he has a simple request for voters in his area– give the district $665,000.

He says it’s a fair request. The state cut about one million dollars from the district’s budget over the last two years. After laying off ten teachers and even closing an elementary school, frankly, the district is a little desperate.

“A lot of people have accused this school board of scare tactics.” says Roberts. “Of oh, you’re trying to scare people into doing this. I couldn’t agree or disagree more. From the stand point of we wouldn’t be doing our job if we didn’t lay out all the possibilities.”

He says Sheridan has two options – voters can pass a referendum or the district needs to consolidate.

So how did Sheridan end up in this position?

John Krause (Click here for a complete transcript of our conversation with Krauss) headed a research team behind a report Governor Mitch Daniels commissioned in 2007 entitled “Streamlining Local Government.” Among other findings, was a suggestion to eliminate all school districts with fewer than two thousand students.  The basic idea was to eliminate administrators, but keep the school buildings.

“There are quite are few that are very large, then there’s some that are very, very small. But both of them have the same administrative structure as the other,” says Krause. “For example, superintendent and assistant superintendent.”

He and his research team suggested a structured approach where schools made and implemented their own consolidation plans– all under the watchful eye of the Indiana Department of Education.

Let’s take a trip across the state to Eastern Greene Schools. Located among cornfields at a crossroads about 15 miles from Bloomfield.

Ty Mungle has been in charge of the district for about three years. During that time, his schools which serve about 14 hundred students have faced large cutbacks from the state. Mungle’s fired teachers to make up for the shortfall.

“Obviously a large percentage of our budgets ends up in salary and benefits,” says Mungle. “And unfortunately, that’s where we have to end up. Is looking at personnel.”

According to education policy analyst David Dressler, Mungle doesn’t have many other options. 16 percent of people living in his district are at or below the poverty line, so it’s unlikely they’d support a referendum.

“Taxpayers often take the attitude,”says Dressler. “You mean I can vote no on taxes? Why would I do otherwise?”

Dressler says without a referendum, there will continue to be less money to pay more and more expensive costs. Meaning if Mungle doesn’t pass a referendum, then he has little choice other than to keep firing teachers every year. It’s the classic death by a million cuts.

And, in the mean time, with fewer teachers each year, there’ll be fewer classes. After all, no P.E. teacher, no gym class. No foreign language teacher, no French class. Lose too many teachers and eventually, the school disappears.

As a companion to this piece, we’re conducting a survey.  Click here to vote in our interactive poll and feel free to leave comments.  We want to hear your thoughts.  Would you support a referendum in your area?