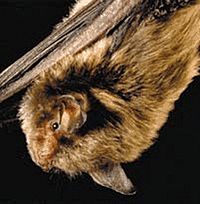 Some sources of school funding are in danger of disappearing, just like this cute little Indiana Bat.

The state pays the lions share of Indiana’s education bills, but there are countless other smaller sources of education funding.  Most pay for specific programs.  Some come from private sources, some from the state and federal government. But they all have one thing in common. A rough economy and massive changes in the state legislature have brought many of these sources of funding to the brink of solvency.

Don’t get too excited. Your property tax bill isn’t going away. It’s the value of your home that’s flying the white flag and retreating.  According to the US Census Bureau, Indiana already has some of the lowest property values in the country and those home prices are on the decline.

While that might be good for people looking to buy a house, it is hard on local school districts. Indiana’s property tax laws were arrange so that districts could determine a budget, then set rates to meet these needs.

In recent years, this system has changed considerably.  In the beginning, there were limitations on the amount that tax rates could be changed.  This was followed by laws which capped the percentage of a home’s value which could taxed to one percent.  Finally, an amendment to the Indiana State Constitution was ratified by voters, permanently enshrining these tax caps into the state’s highest governing document.

Schools have been particularly hard hit by these limitations, because they are the largest recipients of property tax revenue in the state.

Every two years, the General Assembly passes a budget which includes a new school funding formula.  In this formula are a groups of grants referred to as categoricals. Each of the categorical grants is designed to cover a specific need which might arise at an individual school district.  That could be additional funding to cover special education programing or grants to help small school districts cover fixed expenses like maintenance.

The problem?  These grants can change wildly with the introduction of a new school funding formula.  For example, so called “small schools” grants were eliminated during the most recent budget cycle.  A number of schools in small districts like Eastern Greene Schools had come to count on this funding to offset loses in their property tax base.

The state also eliminated some “prime time” grants, replacing them with a smattering of other more specifically focused grants for full day kindergarten, early reading, and special intervention.

While it is unlikely that all of the categorical grants will ever disappear, they change frequently in response to pressure from the legislature.  This has creates a system under which many schools end up changing their programing to match availabile funding.

According to a study from Indiana University based research group The Center on Charitable Giving total philanthropic giving has declined dramatically over the last few years.  To make matters worse, many large institutional donors have seen their endowments take a hit due to instability in financial markets.

While this affects all schools, the state’s charter schools are the most vulnerable during times of limited generosity  Traditional public schools often treat donations as a bonus. But, for charters, these funds, goods and services can be vital to their day to day operation.