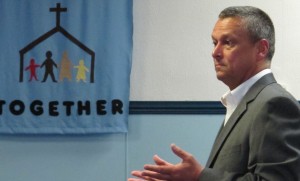 Indiana state superintendent Tony Bennett says he wasn’t directly involved in negotiating contracts with outside companies the state’s hiring to intervene in seven of the state’s failing schools.

We’ve reported at least two of these companies — Edison Learning and Wireless Generation — each made donation’s to Bennett’s 2008 election campaign.

In a meeting Thursday discussing the state’s takeover of Roosevelt Career & Technical Academy in Gary, Bennett downplayed the importance of the donations.

“Given the scope of the money that’s involved here, I would tell you that if all they gave me was $1000, and they’re looking for a contract, I’m a pretty cheap date,” Bennett said, drawing a laugh from the crowd of more than 50 people at a Gary church.