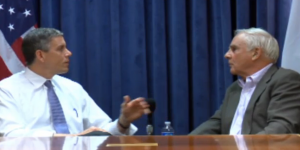 It’s a stance Duncan has taken before: vouchers take state resources away from public schools.

“I want great public education. A seven year old doesn’t know whether he’s going to a public school or a voucher school… We underinvest in public education and we need to put more resources in, not to support the status quo, but to improve” told PBS correspondent John Merrow in a live web stream.

While Duncan has made similar statements in the past, he has said that voucher programs are necessary in certain cases — such as in Washington, D.C. schools.

When Duncan and Indiana Gov. Mitch Daniels — who supports private and parochial school vouchers — appeared on stage together in April, Duncan’s language was nearly identical (as reported by the Associated Press):