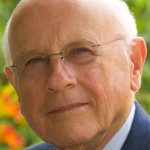 Former Indiana University president John Ryan had lived all over the world. He was born in Chicago, graduated from high school in Minnesota and college in Utah, did doctoral work in Thailand, and held administrative and teaching posts across the U.S.

But it was in Bloomington, Indiana — a place he came to consider home after a career as a professor and administrator in Wisconsin, Massachusetts, Maryland, New York, and Arizona — where Ryan passed away early Saturday. He was 81.

His longevity. Ryan’s 16-year tenure was the fourth-longest of any president, exceeded only by Andrew Wylie (IU’s first president), William Lowe Bryan, and the beloved Herman B Wells.

His financial acumen. State appropriations for IU more than tripled during his tenure as enrollment jumped by 20 percent. After retiring from his post as president, he raised money for IU as part of The Campaign for Indiana — which ultimately exceeded its $203 million goal, raising more than $319 million by 1989.

His focus on internationalizing IU. Ryan opened the IU Office of International Programs, and under his tenure, the university opened programs in Poland, Hungary, Malaysia, Spain. Ryan is a key reason IU teaches more foreign languages than any other university, IU spokesperson Mark Land said Saturday.

As a post-script, one bonus thing to remember about Ryan: He greenlighted production of the Academy Award-winning 1979 film Breaking Away on IU’s campus.

Ryan even had a cameo.