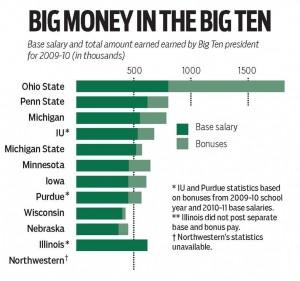 Infographic from the Indiana Daily Student, comparing IU president Michael McRobbie's 2011-12 salary with what other Big Ten presidents made in 2009-10.

There’s a neat infographic in this morning’s Indiana Daily Student showing how IU president Michael McRobbie’s salary stacks up against his peers in the Big 10 after news of his pay increase earlier this week.

While I thought it was a tad confusing because it compared old data from other universities while factoring in an increase in base pay (the darker green) at IU and Purdue, it does demonstrate an important point:  When McRobbie was hired, IU trustees promised they would raise his salary from the bottom to the middle of the Big 10.

Promise or no promise, many university faculty and staff are peeved.  From the Associated Press:

The Communication Workers of America Local 4730 called on McRobbie Wednesday to forgo all but 1.5 percent of his increase to match the average pay raises of university employees. 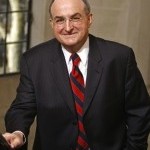 But the Bloomington Herald-Times editorial board came to McRobbie’s defense:

He’s been the most successful IU president in quite some time in dealing with leaders in Indianapolis, and besides all that, he seems to have gained control of a troubled athletic department.

Leaders like that get noticed. The trustees have paid attention to his salary for fear a university with deeper pockets would come along and make McRobbie an offer he couldn’t refuse. That’s prudent management.

Do you think it’s “prudent management?” Or does is a 22 percent pay increase in two years excessive?