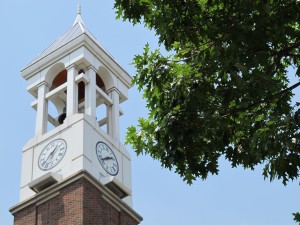 Purdue University, where an average of 40 percent of all grades given out are A's.

Looking to graduate college with lots of A’s on your transcript? Major in Aerospace Studies at Indiana University, or take a lot of band classes at Purdue.

Amid the debate over grade inflation across the country — a national study found three out of every four students at public flagship universities earn either an ‘A’ or a ‘B’ in their classes — we took a closer look at grades data at Indiana’s flagship universities, IU and Purdue.

But data from the Spring 2011 semester also show individual schools and academic departments within IU and Purdue vary widely in how many A’s they give out — check out the chart after the jump:

The departments where you’re most likely to get an A:

Essentially, the chart shows you’re more likely to get an A-range grade (A–, A, A+) taking classes in these departments than the average class in IU’s 68 departments or Purdue’s 103 departments.

The departments where you’re least likely to get an A:

* All students received grades classified as ‘other,’ such as in pass/fail courses.

The numbers raise questions we’ll be exploring in our reporting on StateImpact. Do these differences in the number of A’s come from easier or harder classes across different departments? Do professors grade differently? Across the board, are students simply getting smarter? Or do they demonstrate that “grade inflation” is a macro-level problem, but on the micro-level, classes are still just as difficult as they’ve always been? And is grade inflation actually a bad thing?

Stuart Rojstaczer and Christopher Healy authored the national study — we’ve written about it before. Both have criticized what they say is a pattern of inflating grades tracing back to the 1940s:

The evolution of grading has made it difficult to distinguish between excellent and good performance… When A is ordinary, college grades cross a significant threshold. Over a period of roughly 50 years, with a slight reversal from the mid-1970s to the mid-1980s, America’s institutions of higher learning gradually created a fiction that excellence was common and that failure was virtually nonexistent.

Some potential causes of grade inflation: professors are using more subjective factors in grading, and according to the Minnesota-based Center for Excellence in Teaching and Learning, universities are watering down course contents:

For large public universities, the temptation might be to lower both the expectations and demands in individual courses. A fairly liberal admissions policy, a large number of non-traditional students, and a large number of working students all tempt professors to lower their expectations by reducing the number of textbooks, the amount of writing, and the amount of homework in the course. The goal may be laudable in responding to the particular needs of a specific student body but the result may be inflated grades.

But education writer Alfie Kohn says it’s not clear grades across the board are actually inflating. Even in individual schools where grades are going up, it’s not fair to assume that means the A’s are actually coming easier:

The burden rests with critics to demonstrate that those higher grades are undeserved, and one can cite any number of alternative explanations. Maybe students are turning in better assignments. Maybe instructors used to be too stingy with their marks and have become more reasonable. Maybe the concept of assessment itself has evolved, so that today it is more a means for allowing students to demonstrate what they know rather than for sorting them or “catching them out.” (The real question, then, is why we spent so many years trying to make good students look bad)…

The bottom line: No one has ever demonstrated that students today get A’s for the same work that used to receive B’s or C’s. We simply do not have the data to support such a claim.

So are you worried about grades going up? Are you convinced grade inflation is a problem?