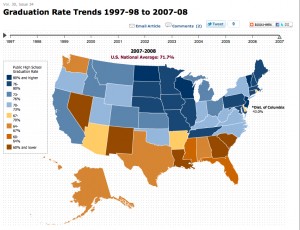 According to a neat little app on Education Week’s website, Indiana’s graduation rate has hovered within two or three percent of 70% for nearly ten years.

According to the Indiana Department of Education, the state has made enormous strides in the last few years, increasing graduation rates from 76% in 2007 to better than 84% in 2011, with year-over-year improvements of at least one to two percent each year since 2006.

The disparity is interesting to think about and mostly reflects differences in how the two groups calculate the numbers.  For example, the IDOE counts students who graduate with alternative forms of a diploma.  This includes all sorts of waivers issued in lieu of meeting academic requirements – everything from diplomas issued to special education students to alternative credits given to a student for participating in advanced work study or internship programs.

Education Week’s calculations do not include any of these students.  They use a much more straightforward formula which basically compares how many students a school enrolls in 9th grade versus how many students graduate four years later.  Students who do not meet the state’s basic graduation requirements are not counted – whether they’re overachieving A+ graduates or people who opted to participate in vocational programs instead of math.