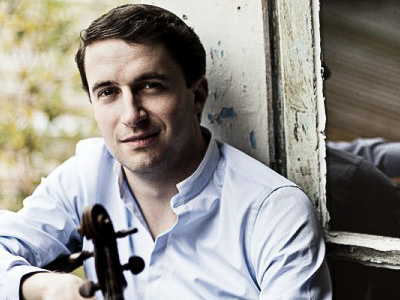 Noah Bendix-Balgley is First Concertmaster of the Berlin Philharmonic, a position he won when he was just 30 years old. By the time he was offered the first chair of one of the most venerable string sections in the world, Noah had already been concertmaster of the Pittsburgh Symphony for four years. But these were just the latest in a career full of early accomplishments.

Bendix-Balgley started playing violin at age four. By age nine, he had already impressed violin legend Yehudi Menuhin. Noah studied at Crowden School at Berkeley, with Mauricio Fuks here at the IU Jacobs School of Music, and at the Munich Hochschule with Christoph Poppen and Ana Chumachenco.

In addition to his orchestral prowess, Noah is a sought-after soloist and chamber musician. He’s currently a member of Philharmonix, kind of a dream-team septet which features members of both the Berlin and Vienna Philharmonic orchestras.

He’s also an accomplished performer of klezmer music. Noah’s played with world-renowned klezmer groups such as Brave Old World, and he’s taught klezmer violin at workshops in Europe and in the US. He’s even written a Klezmer concerto for violin and orchestra, which he performed while he was back on the IU campus recently, as a Wells Scholars Program visiting professor. While he was in town, he had a conversation with Aaron Cain at the WFIU studios.