Margaret Fisher Squires is a psychotherapist who has shared her poetry largely through local readings with the Hart Rock Poetry Series, the Writers Guild at Bloomington, and Five Women Poets.  She is perhaps the only person to have published a poem in the Bloomingfoods Co-op newsletter.  She is one of the contributors to the Five Women Poets 2016 chapbook "Birds of a Feather."

Welcome to The Poets Weave. I'm Romayne Rubinas Dorsey. Margaret, what poems have you brought for us today?

After the day's meetings and muddles

I seek the sweep of dragon wings

and the spires of elven palaces

which provide their own

A loud slapping bang sounds outside,
jerking us away from bedtime TV haze.
We look questions at each other,
get up and turn on the back porch light,
stare into the wall of blackness
that the light creates.

Impossible to track the sound.
It’s a windy night,
and we’re remodeling.

The back yard is piled with lengths of guttering,
plywood sheets, displaced patio furniture
boxes full of siding,
boxes that once held siding.
Anything could have blown
into anything else.
Our questions remain unanswered.

These days, we enter and leave the house
through the garage
because the front steps don’t exist anymore.
The front door opens on a five-foot drop.
If the fire alarm sounds,
and instinct sends us through the front door,
we will fall
onto broken cement and mud
in our pajamas.

Thick yellow paint brightens the front bathroom
but we don’t use it much.
There are no towel racks yet.

In a week or two, the builder will be ready
to remodel the bathroom that opens off our bedroom.
We’ll have to shift everything,
sleep in the living room.

Easy to see why we put off all house repairs
for the past twenty years.

And yet, a score of people come to my psychotherapy practice
every week,
tearing down old walls,
building new ones,
changing all the entrances and exits,
and determinedly rewiring
switch after switch.

Awakening,
she scuffed into her slippers
and donned her bathrobe,
grateful to feel warm
and wrapped in something ancient, maternal, and lasting.

She padded through the living room
and opened the front door.
She let out a sigh that was half chuckle.
Again, her friend's poems were strewn across the doormat,
heaped up next to the newspaper.

One of the poems needed to be put in water.
She found a blue glass vase,
left over from three Valentine's Days ago,
and that took care of that one.

Three of them she affixed to the refrigerator door,
using the lobster-shaped magnets they'd picked up
in Maine last summer.
Two of those poems stayed in place,
but one kept slipping from the magnets' hold
and sliding to the floor.
Finally it skidded under the refrigerator.
She gave up and let it lie there,
gathering dust.

One poem went into the bread box
with yesterday's loaf.
She thought some hours
in fragrant, wholesome dark
would do it worlds of good.

Two of the poems rolled and scuffled on the floor.
Honestly, she thought, it's like having a litter of kittens wished on you.
I'm really going to have to speak to her about this.

But she couldn't see herself doing that.

She separated the scufflers.
One of them was satisfied with a saucer of milk.
It settled down, lapping.

As for the last poem,
it curled up in her lap.
As long as she kept rubbing its tummy
with an idle finger,
it allowed her to read the newspaper at last.

The Canada geese and mallards

paddling on the breeze-crinkled waves

and the orange koi fish

beneath the blue-green surface

do not seem to have read

the notice molded half an inch deep

into the canal’s concrete curb:  NO SWIMMING

You've been listening to the poetry of Margaret Fisher Squires on The Poets Weave. I'm Romayne Rubinas Dorsey. 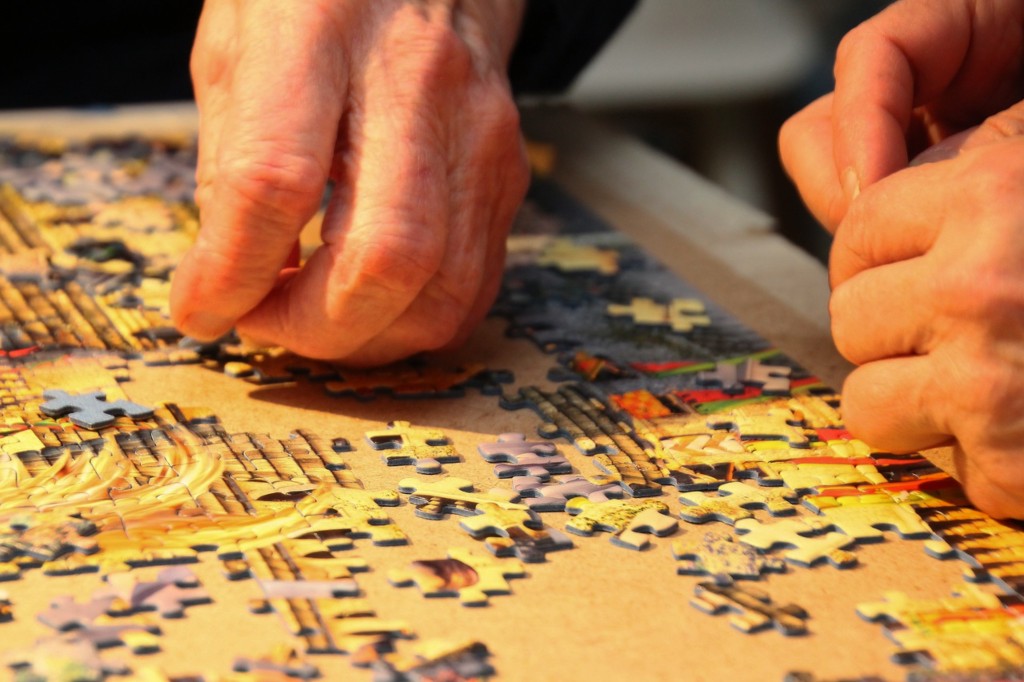 "...I seek the sweep of dragon wings / and the spires of elven palaces / printed on tiny cardboard shapes..." (Public domain, pxhere.com)

Margaret Fisher Squires is a psychotherapist who has shared her poetry largely through local readings with the Hart Rock Poetry Series, the Writers Guild at Bloomington, and Five Women Poets. She is perhaps the only person to have published a poem in the Bloomingfoods Co-op newsletter. She is one of the contributors to the Five Women Poets 2016 chapbook "Birds of a Feather."